What: The New York Press Club’s book event for “Step Out on Nothing”

Byron Pitts said that producing a segment for a news show takes him exactly as long as the time available. Whether he has ten minutes or two hours, he meets every deadline. The same apparently holds true for his panels. They last exactly as long as the time allotted. The problem here was that Pitts only had enough material to fill a short segment and he was forced to go on much longer.

The true shame is that we actually liked Pitts. He told his story well, detailed in his new book, Step Out on Nothing, about how his personal struggles with a stutter and illiteracy held him back well into his teens. Motivation from his mother and a passion for broadcasting propelled Pitts forward in his studies and into his early working years (he revealed that his mother used to call his supervisors at work to check up on him). He’s a self-made man from Baltimore, the first in his family to graduate from college. Everything about his story is touching and inspiring.

Yet, Pitts too often fell back on telling childhood and workplace stories instead of sharing observations and insights about the media industry. He listed some of his most chilling moments – seeing Timothy McVeigh executed, covering 9/11 at the scene of the attacks, witnessing dying U.S. soldiers overseas – but never explained how he felt to be at those scenes. 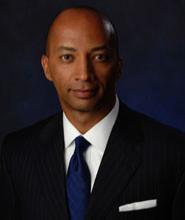 Instead, Pitts talked at length about the two themes that have gotten him where he is today: his optimism and how he finds strength through struggles. He cited Tyler Perry, Pete Carroll and Rupert Murdoch as people who shared this world view with him, and touched on Malcolm Gladwell’s “Outliers” to prove that dedication leads to benefits. While there are lessons to be learned from hearing about millionaires and a billionaire, we still would have liked to have gotten more of Pitts’ impressions.

Pitts frequently cited his book when answering questions, mentioning that there’s more contained inside. It was unclear to us whether his book was a memoir, autobiography or inspirational text. It was clear that Pitts is extremely proud that he’s risen out of the depths of poverty. We just wish we’d heard more about the years between his first job and his current one. “Optimism” only tells the surface of that story.

What They Said
“Growing up the way I did, I know what it’s like to be powerless.”
– Byron Pitts prefers to interview the overlooked ahead of the overexposed

“There are the things that make us Americans. A free press is vital to our democracy. As long as there is America there will be a place for journalists.”
– Byron Pitts isn’t worried about downsizing and the uncertain future of media

“The people who are the most successful in my business are themselves because people recognize what is real.”
– Byron Pitts took Ben Stiller’s “Starsky and Hutch” Advice to heart

Panel Nerds don’t like…Sour Apples
There were an incredible number of journalism students and struggling journalists at this event. So much so that pretty much every question thrown at Pitts was geared around the failures of the journalism world and the pitfalls and setbacks that individuals had encountered. Although those remain pivotal issues at an unstable time, we couldn’t help but long for a time before doomsday set in. After enduring four questions about layoffs and rotten bosses, we were ready for something lighter and brighter. What we got was a question about China’s restrictions on its press. We guess it could always be worse.

Panel Nerds Etan Bednarsh and Danny Groner are New York-based writers and avid panel-goers. Want them at your panel? Email them here: [email protected].
Read an excerpt from “Step Out on Nothing” here.