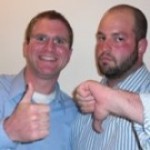 Much of the excitement and anticipation for the panel stemmed from opening remarks delivered by a series of hosts of the event. The moderator, David Brancaccio, the fourth speaker of the night, delivered a short presentation with his introduction. A half an hour went by before Brancaccio first invited the panelists to the stage and seated them.

The panelists, all of whom have written books in recent years about the financial industry, gathered to mark the one year anniversary of the government bailout. Brancaccio asked them to draw lessons from recent economic failures and to propose ways for the government to be a part of the solution. The panelist who achieved that best was Daniel Gross. Gross provided some insight into how bubbles typically build infrastructure in America and then lead to consolidation. But Gross’s contributions were overshadowed by Nomi Prins.

Prins simply had too much to share. She rambled for much of the night, at times giving telling pauses between sentences that indicated she’d lost her train of thought and couldn’t trace her way back to the proposed question. Prins focused more on the process that led to the collapse, describing it with longwinded analogies. It demonstrated how difficult a time the media has had over the course of the year to make finance understandable.

Brancaccio could have done a better job jumping in and keeping the conversation moving. We felt he should have been more active in including Matt Taibbi in the discussion. Taibbi kept his answers short and to the point and, as a result, remained mostly silent.

The crowd didn’t exhibit the same patience with the panelists as Brancaccio did. Many left early, some fell asleep, and others turned to reading materials, such as the complimentary copies of The Nation, to occupy their attention.

“There’s no value if nobody wants them, yet there they are just sitting there.”
– Nomi Prins points to hype and lies that made bad loans appear to be more attractive than they were. When the truth emerged, nobody wanted the loans anymore

“It’s a sewage system that allows the banks to dump all the garbage on us.”
– Matt Taibbi puts the government bailout of Bear Stearns in terms we can understand

“I’m going to tell a lame financial joke to give each of you 30 seconds to think about the answer.”
– David Brancaccio bought the panel some time to consider their final thoughts for the evening

“It was debt layered with debt, frosted with debt, iced with debt. Say ‘happy birthday’ with debt.”
– Daniel Gross explains how the economic problems just kept getting deeper and deeper

Panel Nerds don’t like… Collecting Cards
We’ve seen it done from time to time as a way to push things along. The moderator will have ushers collect index cards with audience questions written on them. It gives the moderator control over what gets asked during the Q&A. This method winds up giving the moderator a chance to cover topics he glossed over or forgot, but it takes away from the audience’s (and Panel Nerds’) fun in hearing people deliver their questions from the microphone.