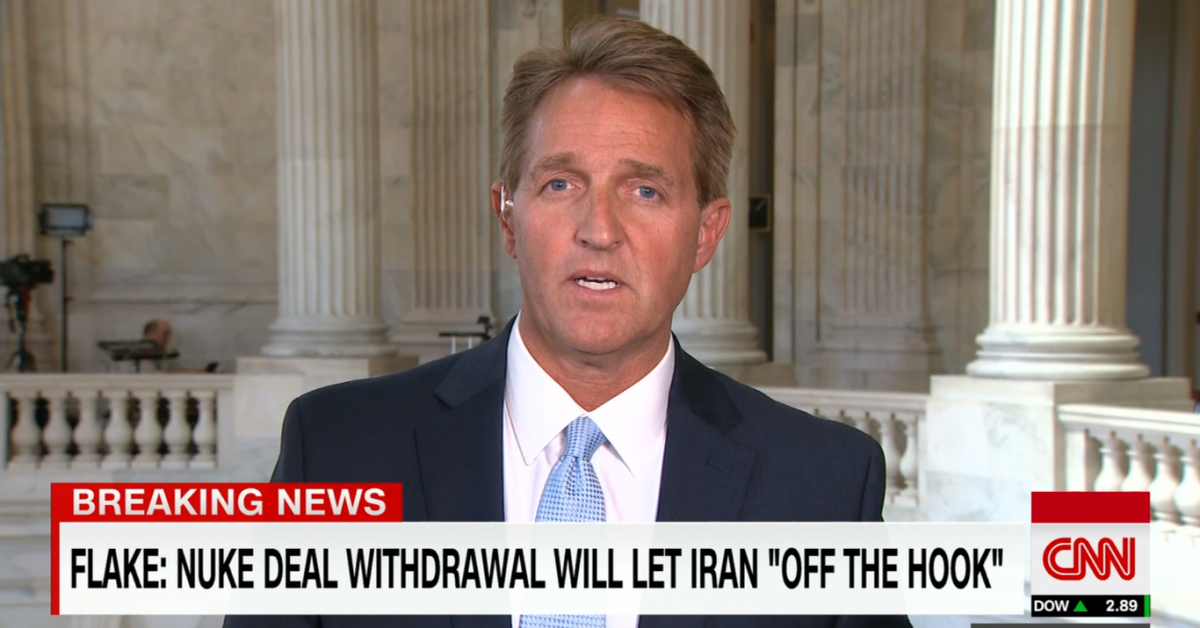 There has been much criticism this week of some “Never Trump” Republicans over their position on President Donald Trump’s decision to withdrawal from the Iran Deal, which those very same Republicans strongly opposed just three years ago.

On its face, I can see why one would say this is pure politics. The same Republicans who opposed the Obama administration’s Iran Deal now support staying in the agreement because President Trump supported pulling out. That’s the far-Right’s argument. But, while that argument is perhaps convincing at first, it’s worth taking a look at the real-world implications of withdrawing from the agreement at a time when America’s credibility was already on the line.

Among the Republicans who opposed the Iran Deal in 2015 but opposed Trump’s withdrawal from the agreement this week is Sen. Jeff Flake from Arizona. Flake told CNN’s Jake Tapper on Tuesday that “pulling out of the deal at this point means that Iran has already realized the benefits…yet to now we let them off the hook with regard to their nuclear obligations.”

“So I just don’t think it’s a wise move at this point,” Flake added.

Absolute Never Trumpism corrupts just as much as Absolute Always Trumpism does. https://t.co/FyUFaiP18X

Another Republican who opposed the president’s withdrawal from the Iran Deal after criticizing it is Ohio Gov. John Kasich. Kasich called the deal a “bad agreement” while campaigning for president in 2016 and, while he said he would not rip up the agreement on day one, he did say he would withdraw if Iran violated its obligations.

According to multiple U.S. intelligence agencies, Iran had not – at least not yet – violated the deal up to this point. So, for Trump to announce this week that the U.S. would withdraw from the deal sends a very dangerous message to our allies around the world, and to adversaries with whom we may seek similar agreements in the future (cough…cough. North Korea).

Gov. John Kasich statement on the withdraw from the Joint Comprehensive Plan of Action #IranDeal pic.twitter.com/VzdxBXt9Bp

Kasich, in a statement Tuesday, called Trump’s decision to withdraw from the deal, without any indication that Iran had actually violated the agreement, “a mistake.”

John Nolte, a writer at Breitbart (which I normally avoid citing, but in this case, I actually believe the alt-Right website accurately captures the sentiment held by many conservatives,” attacked Kasich this way: “So it was not Trump who was swindling us with red meat on the campaign trail. It was not Trump who was conning us with rhetoric about being opposed to the deal. It was oh-so principled Never Trump. In other words, voting for an establishment hack like Kasich would have been the true sucker move.”

But dare I attempt to explain and defend Flake and Kasich’s “hypocrisy,” as it has been portrayed by some, not as hypocritical at all, but smart, well-reasoned, and rational.

Let’s be clear: the Obama administration’s Iran Deal was never a good agreement. It gave Iran too much in exchange for too little. Namely, the U.S. should never have sent the murderous Iranian regime billions of dollars that were supposedly owed to the state terrorism sponsor. It would have been a much fairer approach to simply roll back some of the economic sanctions on Iran in exchange for the international community being able to inspect Iran’s nuclear facilities, at unannounced times, to check for potential nuclear weapons development.

However, the U.S. does not enjoy the capability of going back in time to 2015, when the deal was brokered. The Iran Deal, supported by U.S. allies in Europe, is what it is. Any deal can be improved upon. The Iran Deal is no exception. But by making the agreement and then later withdrawing, even as American intelligence has stated that Iran has so far upheld its part, does absolutely nothing for the U.S., its safety, or its credibility around the world. If anything, President Trump’s withdrawal only puts American national security at risk — and leaves our credibility in tatters.

The U.S. cannot violate its part of an agreement while accusing Iran of doing the same — despite overwhelming evidence from its own intelligence community that Iran has held up its part of the deal — -and expect allies and adversaries moving forward to honor America’s word when it comes to any future deals.  As the world’s leading economic and military power, the U.S. has an obligation to lead by example. That includes keeping our word when it matters.

Disappointingly, Trump’s withdrawal from the Iran Deal is not leading by example. Further, and ironically, those accusing “Never Trump” Republicans of opposing Trump’s withdrawal as being hypocritical are themselves the real hypocrites.

Americans wouldn’t and shouldn’t expect our leaders to trust other nations that withdraw from deals the other party has not violated. We shouldn’t hold ourselves to a different standard.

Correction: A previous version of this article stated that Flake supported the Iran Deal in 2015. He did not.