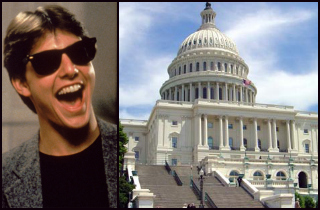 Congress is less popular than car salesmen (the used variety).

They are less popular than canals (the root variety).

And less popular than colonoscopies (it’s assumed they’re referring to the prep portion).

In the end, Congress’ approval rating currently stands at about 10 percent, according to a September 30th CNN poll. The government shutdown will drop that number even further. As a result, we keep hearing the same question asked on cable news this week: Why would a body so unpopular not try to do something, anything…to make themselves more likable?

On the shutdown front, reports say there is no sense of urgency from either side of the aisle for a resolution. Sure, the President just shortened a trip to Asia, but since declaring he isn’t willing to negotiate on anything, what’s the point in sticking around if meaningful dialogue (within these borders, anyway) is off the table?

Back to the main point: So really, why would Congress risk sinking even further in the polls by allowing this shutdown to happen on its watch?

There is no risk.

Despite all the horrific poll numbers, did you know that 91 percent of members of the House get re-elected? The Senate is only slightly more of a ballgame, with 80 percent of its members getting another six years in power. In fact, in the past few election cycles, more incumbents have died in office than lost bids for reelection.

So when people ask why nothing changes inside the beltway, you now have your answer. Not unlike weathermen, they can be wrong more often than right and still get to keep their jobs. As noted in my last column that focused on the general public apathy around the shutdown, only 1/3 of Americans can name their member of Congress.

Ah, but it’s better on the Senate side, right? Higher profiles and only two big names to remember for an entire state must be as easy to recall as the last two Super Bowl winners.

OK, you saw this coming: Only 27 percent of the public can pass that test, according to a survey conducted by the New American Democracy last year.

So while the public loathes Congress and the Senate, respectively, they aren’t particularly compelled enough–or inspired enough–or perhaps are too distracted–to actually do anything about it.

As you know, branding is everything in this country: It’s what makes the Hillary Clinton machine so formidable (nearly 25 years in the national spotlight as First Lady, Senator, Presidential Candidate and Secretary of State). On the state and local level, it’s why an unknown has such a tough time knocking an incumbent out when trying to unseat him or her in the House or Senate. Very few folks vote in Congressional and Senate primaries (about 15 percent), making the wave of support needed to win almost impossible to form.

Many in the media continue to ask how Congress can allow a shutdown to happen (and to a lesser extent, the President), who’s to blame, and most notably, who will pay the price at the polls come next year’s midterms.

The answer to the last question—if history is any indication—is quite simple: