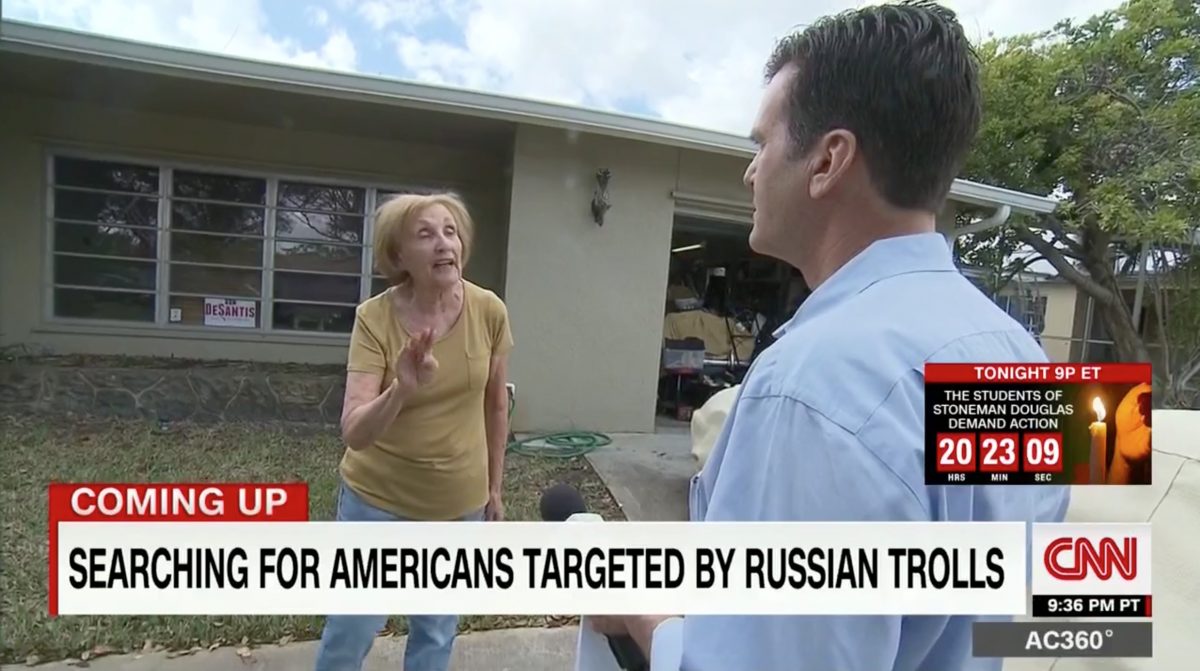 Watching the non-stop, hysterical coverage of so-called Russia-gate over the last few weeks has made me ponder whether CNN and MSNBC producers have been drinking too much Stolichnaya.

This reached a fever pitch when CNN reporter Drew Griffin recently performed a ridiculous, loony stunt confronting one of Trump’s voters, or as CNN dubbed it, the “unwitting Americans,” whose brains were apparently hijacked and bodies uncontrollably lifted into action by Russian trolls.

“One of the unwitting Americans, Trump supporters who helped the Russian internet trolls infiltrate U.S. communities by spreading Russian-made messages without knowing it,” Griffin’s report began.

The basics: Russian trolls started a pro-Trump Facebook group, plastered anti-Hillary stuff all over it, and after Trump voters entered the group, trolls convinced them to start pro-Trump “flash mobs” on their street corners.

So, let me get this straight: voters like the older woman Griffin essentially cornered on her lawn—who were already voting for Trump — were duped into joining a Russian-troll created Facebook group. This brainwashed them and caused them to go yell on street corners at passing cars to vote for Trump, and presumably affected the outcome of the election?

If you’ve followed my reporting and commentary, you know I’m no Trump supporter (though Clinton-loving neoliberals paint me as one), but in what world is this journalism and not the cable-news version of McCarthyism? Is it a good thing that Russian trolls were able to deploy propaganda and fake news on Facebook and other social media? Of course not. Is it the biggest scandal of the 21st century, or as one of the chiefs of the cocktail-crowd, out-of-touch media elite compared it to, 9/11 or Pearl Harbor? No!

But there’s an even more alarming truth about the so-called journalism displayed here: where were reporters like Griffin in 2016 when Hillary Clinton’s super PAC chief David Brock was unleashing an army of trolls to spread disinformation about Bernie Sanders? Was there some lawn-fracas between the two lost somewhere on the Internet I missed? I guess domestic bots and trolls deployed to influence elections in favor of establishment-loved candidates are just the cost of business, but foreign bots and trolls that attack the establishment-favored candidate are akin to Pearl Harbor.

The list goes on: as I covered extensively while a reporter for The Young Turks, a recently-upgraded 200,000 Democratic voters were purged off the voting rolls in New York during the 2016 Democratic Primary. There wasn’t a national reporter at the courthouse when a voting rights groups sued the New York Board of Elections, but I sure was there. There was zero uproar on CNN or MSNBC over a huge number of voters being disenfranchised, or as they rail about now, our “democracy being under attack.” I guess since Clinton won the primary, it was just some minor blip New York officials would have to deal with but not a threat to the basic fabric of our society.

Unless I was sleeping, I don’t recall David Frum — who can always be counted on for selective amnesia and hypocrisy — writing “America is under attack and President Obama Doesn’t Care” after Arizona voters had to wait on five, six, seven, and in some cases, eight-hour lines to vote during the Democratic Primary because the local Republican Party shut down 70 percent of the polling places between 2012 and 2016.

I don’t remember an emotional Rachel Maddow begging for someone to defend America when Rhode Island Governor Gina Raimondo — a major ally of Clinton’s — allowed two-thirds of the state’s polling places to be shuttered in an open-primary state that favored Sanders (he still won by 12 percentage points).

I don’t recall 24/7 cable news or New York Times coverage on the voter-suppression on steroids program called Crosscheck, where GOP officials erroneously and intentionally aimed to purge tens of thousands of Democrats off the voting rolls in 2016.

There are trolls and bots dispersed by Democratic and Republican operatives to spread disinformation and confusion every day. There are also countless other instances of voter suppression and election fraud that have resulted in absolute silence from the corporate media. Sure, foreign entities targeting voters is in a different category, but if you think about American values, the right to vote is enshrined atop the list. This makes it even more odd that true infringements on our democracy get zero play in the corporate media but a bunch of Russians, scattered across an office in St. Petersburg, creating fake Facebook groups poses some an existential threat to democracy.

People will call me a Kremlin puppet and all the rest, but the truth is, I’m pointing out what a large swath of digital media consumers and voters feel: that corporate media is losing its collective lunch over some abstract notion that Russian trolls influenced our election — while offering zero concern over more specific, and consequential, threats to democracy. It’s also a much more sensational and easy narrative to frame than having to cover other reasons Trump won: like the disastrous effects of NAFTA and disillusionment with the Wall Street-obsessed Democratic Party across the Rust Belt.

If Robert Mueller eventually finds actual evidence that the Trump campaign coordinated with the Russian government to hack emails and distribute them through WikiLeaks, I’m all for a mass media meltdown. That would actually be pretty scandalous, and frankly, treasonous. But, at this moment, facts don’t support that, regardless of how much folks like Maddow desperately wish it so.

So for now, can we all just calm down and maybe focus on real news: like the record-widening income gap, the continued water contamination across America, the systemic racism and police brutality erupting in places like St. Louis, and as we’ve seen over the horrible last week, the gun terrorism mowing down our children and shattering communities.

Call me radical, but I think those struggles are an actual threat to democracy.

Jordan Chariton is a journalist who’s reported and produced at The Young Turks, MSNBC, and Fox News. He’s also author of Corporate Con Job: How Mainstream Media Aids the Oligarchy. Follow him on Twitter at @JordanChariton.