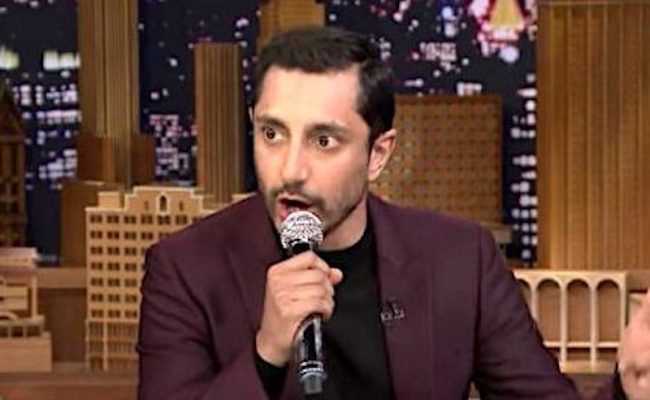 As President Trump rolled out his new travel ban earlier today, America was, again, told that this extreme measure was being taken in order to keep us safe from ISIS.

Are you sick of hearing POTUS talk about ISIS? Probably not as much as you’re sick of hearing everyone else talk about Russia, but that’s neither here nor there. There’s one person, though, who also has strong (and somewhat misplaced) feelings on ISIS: Star Wars star Riz Ahmed.

Last week the British/Pakistani/American actor spoke before British Parliament. The Washington Post reported that the actor was invited to speak about diversity (how vague), but Ahmed felt that the use of that word diminished the larger, overarching problem.

From there, the actor/rapper (yes, he raps, and yes, he is on the Hamilton Mixtape) launched into a speech in which he criticized the British film industry for having a propensity for creating “all-white period dramas.” This argument of his isn’t a new one. Last year, in an interview with The Guardian, Ahmed spoke his dissatisfaction with the industry and, again, pointed his finger towards period pieces “and the myth we export of all-white lords and ladies.”

Turning his sights to the American industry, Ahmed seemed to think that we did things better. But not by much, adding, “American society is pretty segregated… But the myth it exports is of a racial melting-pot, everyone solving crimes and fighting aliens side by side.” He would tell Parliament that the British industry needed to take a page from the American playbook.

From there the Nightcrawler star would then start a particularly divisive tangent. He would posit that, essentially, the lack of diversity in mainstream films and television could possibly be leading to a surge in ISIS recruitment, given that some ISIS propaganda films feature diverse casts (word choice?).

Growing up a minority in Britain, Ahmed told a story of how his mother would shout anytime someone on the television vaguely looked like him (probably meaning another minority). He would continue, trying to further his argument, by confessing that he almost didn’t attend drama school because he “didn’t think there was any future in [his] playing ‘Cabdriver number two.'” That anecdote, in and of itself, is a little too melodramatic and self-deprecating to be taken very seriously.

Ahmed’s argument, simply, is that because minorities see themselves represented, on screen, as villains or stereotypes they are more likely to empathize with the representations of themselves they see in ISIS propaganda videos. A year ago WaPo reported on ISIS and their surprisingly adept and advanced video production values, which Ahmed seemed to agree with. “In the mind of the ISIS recruit, he’s a version of James Bond,” referring to the minority portrayal being presented on screen. “Where are we showing our kids they can be heros in our stories,” he added. Going a step further into the ridiculous, he said “If we fail to represent people in our mainstream narratives, they’ll switch off. They’ll retreat to fringe narratives, to filtered bubbles online, and sometimes even off to Syria.”

Now, okay. I’m hesitant to lob around the word “irresponsible” too much, but his whole argument seems very reckless to me. First of all, Ahmed’s using the recent trend of British period dramas being produced as an example of the lack of diversity in casting is easily refuted. Of course a period drama, set in 1920 England, would not have roles available for an actor of Pakistani descent. Moreover, the desire to create art centered around a nation’s history isn’t a new concept, nor is it a valid reason to lament the lack of color-blind casting in such projects.

Example: If a studio decided to remake The Lion in Winter, which is set in England in 1183 and deals with King Henry II, his wife, and sons, historically none of those people were persons of color. So why, if to be historically accurate, if the director was choosing to pay homage to the history of England, would the actors not all be white? That isn’t to say that the choice couldn’t (and shouldn’t) be made to use actor’s of color in various historical roles, but these are all subjective, artful decisions made by a director. Conversely, would Ahmed expect that a television show centered around some part of Pakistani history be cast with white actors? No.

As to his sob-story about almost deferring from college because he didn’t want to be pigeon-holed into cab driver-esque roles, I would like to remind him that no matter how much anyone in the film or television industry wants to argue otherwise, what they are creating is not always truly indicative of real life. Yes, sadly, minorities are often cab driver. But they are also often scientists, lawyers, doctors, artists. And they have been portrayed as such.

As to Ahmed’s convoluted argument that because ISIS videos portray minorities in more enticing roles than the mainstream media does, I’d ask him to show me any research supporting that claim. Those who take to the propaganda of the Islamic State are probably looking for something to believe in more than they are looking for a media outlet that portrays them as a James Bond-type figure.

I should say that my critique of Ahmed is not meant to diminish the atrocities perpetrated by the ISIS. I would be remiss to not admit that. Celebrities often have a very pubic platform and the statements they choose to make are usually well-intentioned, but both divisive and uninformed. Ahmed — and all celebrities — should be careful not to use his position and the platforms it affords to make careless and potentially damaging remarks, especially where something as polarizing as the Islamic State is concerned.