Stephen Dubner and Steven Levitt Get Their Super Freak-on-omics 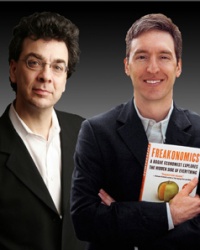 Stephen J. Dubner says that he faced a difficult adjustment when moving from covering his one-time subject, economist Steven D. Levitt, to collaborating with him on Freakonomics. On the contrary, Levitt was relieved to shift roles, half-jokingly saying that the three days Dubner interviewed him for his piece were some of the most excruciating of his entire life.

At first, Dubner doubted whether Americans would care about Levitt’s hypotheses at all, and both were convinced that the book had no future. Levitt’s father even told him that it was immoral to collect money for a book he knew would fail. But after some insistence from their publisher, the two embarked on what would become a best-selling, culture shaping part of the zeitgeist.

They said they struggled to come up with a catchy name for the book, and went with Freakonomics because nobody could think of anything better. In true Freakonomics fashion, they believe this reinforces the chapter from their book about baby names. Names, they argue, bear little importance and relevance to predicting success.

They also discussed the recent uproar over their chapter on global warming. Dubner and Levitt maintain that their arguments have been distorted. They spent significant time trying to explain the controversy, and its key players, to the crowd. Ultimately, they claimed that the outrage is misguided because their chapter is not attempting to find a resolution, but only trying to look at the problem in a different way.

Since there was no moderator at this event, the pair led their own conversation (at one point Dubner asked “Is there anybody in charge here?”) Their back-and-forth had perfect timing and consideration as they gently jabbed at each other. The highlight of the night came when, faced with time constraints, Dubner suggested that they let the audience decide who gets to ask the last question. Levitt, ever the economist, interjected with a proposal that they auction it off to the highest bidder.

“We try to look at things that happen, things that can be measured with data, and try to figure out how all of this is working.”
– Stephen J. Dubner summarizes the duo’s ongoing game plan

“It’s hard to put a title on a book that has no point.”
– Steven D. Levitt thinks that people seeking definitive conclusions should look elsewhere

“To me, what Levitt was doing in an empirical way was what I liked to do as a writer.”
– Stephen J. Dubner prefers to write about a variety of different things that pique his interest

“There was one thing that would get me to write this book: money.”
– Steven D. Levitt’s deadpan delivery left us convinced he was being serious

“Most people think of science as science but it winds up having a whole lot of dogma and a whole lot of politics in it.”
– Stephen J. Dubner believes that it’s a problem if good science is being knocked down by detractors

Panel Nerds don’t like…Dwellers
The pair set aside roughly an hour for questions. During that time, they got through a total of five questions. One of the reasons was because once they sufficiently answered a question and called on the next person, the questioner re-opened the same exact topic (starting off with “Getting back to your last point.”) There were about 30 other hands raised at the time. With interesting and engaging speakers who can easily rant for an hour about the same subject, why choose to stay there incessantly? As a result, we ran out of time during the “how Chicago prostitutes make less per hour because of the sexual revolution” discussion. For shame. For very very shame.