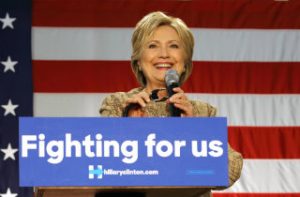 On Tuesday, the former Democratic nominee and first woman to win the popular vote in a U.S. presidential election, Hillary Clinton, arrived in Chicago to deliver a speech at the American Library Association’s annual conference. Clinton’s speech is expected to touch on her forthcoming illustrated children’s book It Takes a Village, inspired by her 1996 book of the same title. The book will be published by Simon & Schuster in September.

The appearance marks one of Clinton’s relatively rare public speeches since November. In the wake of her shocking loss to Donald Trump, for some time, Clinton was more likely to be spotted in the woods than delivering public remarks. But when she finally surfaced, opening up about her loss in interviews, starting a political action committee to “help the resistance,” and delivering jabs at Trump on Twitter about the travel ban and his notorious “covfefe” gaffe, if Clinton was expecting sympathy and welcoming, that wasn’t at all what she got.

“Dear Hillary Clinton, please stay in the woods forever,” some wrote. Additionally, polling has revealed that Clinton appears to be the least popular failed presidential candidate in recent history. The general consensus is that by continuing to be vocal about political issues of the day and well, not staying in the woods, Clinton is hurting her party by soaking up attention that could be going to other members of her party.

There’s certainly some validity to this criticism. The Democratic party is severely lacking in a new, bright star to run in 2020, and Clinton’s critics reason that all the attention Clinton draws to herself could be going to, say, New Jersey Sen. Cory Booker, perhaps New York Sen. Kirsten Gillibrand.

(Of course, this reasoning ignores how the ideal 2020 contender ought to be charismatic enough to draw attention to themselves with or without background noise from Hillary — which brings me to my next point that maybe, just maybe, demands for Clinton to be quiet are less about strategy and more about sexism.)

The solution, many across the political spectrum say, is for Clinton to stop talking. Disappear. Pretend her decades of public service never happened, act as if from a young age, she didn’t dedicate her life to serving and uplifting women, children, and the American people at large.

To tell Clinton to silence herself and fade into the margins, accept her role in history as the martyr of President Donald Trump and disappear, is to tell her to act against her very nature.

What’s more, such attempts to silence her veer on plain sexist. Where is the criticism of former President Obama for remaining vocal and active in politics? Is he not soaking up attention, too? It’s impossible to ignore the gendered component of criticisms of Clinton for continuing to talk, of perceiving a woman voicing her opinions and standing up for her beliefs as threatening.

Clinton, after all, won the popular vote by almost 3 million votes. It’s fair to say the vast majority of Americans still want to hear from her, still regard her as their preferred leader.

At the end of the day, it’s not even just that, like all other private citizens, Clinton has the right to free speech. It’s fair to say that after decades of public service, after shattering glass ceilings, braving shocking sexism and pushing her way through all kinds of gendered barriers, after serving as first lady then senator then secretary of state, then, of course, winning the popular vote in the most recent presidential election, that Clinton is a good judge of what’s going on, and her thoughts, ideas, observations and comments hold a certain amount of value and warrant listening and respect.

There’s a lot we can all learn from Clinton, and many young women in particular continue to look to her for inspiration as they shoulder everyday sexism, or perhaps even consider runs at local office. What message would it send to these young women if, after experiencing a loss, Clinton vanished into thin air and never rose again, never spoke again?

Attempts to silence her, like what we’ve seen done to Massachusetts Sen. Elizabeth Warren and California Sen. Kamala Harris (hm, I wonder what all three of these women have in common? Oh, right, they’re all women) aren’t just remarkably offensive to women everywhere — they’re also arguably against Democrats’ best interests, too.