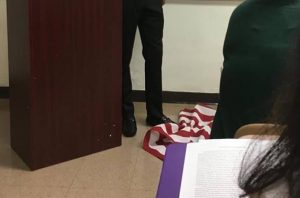 Look up “chutzpah” in the dictionary, and you may very well find an image of Massey Hill Classical High School history teacher Lee Francis.

Francis, in case you missed the latest media circus, was lecturing his students about the First Amendment and the importance of free speech. To make his point, he stomped on an American flag in front of the classroom (and trying and failing to burn or cut it). The story went viral this week when a student took a picture of the act and local parents complained.

Agree or disagree with Francis’ protest, there’s no doubt that he has a right under the First Amendment to do it. Which makes his reaction to the backlash all the more odious:

Mr. Francis said he has obtained legal counsel. “There were some laws broken as far as photos of me taken that violate the county’s policies – and issues that could be considered defamation of character,” he said.

He said the student who snapped the photo of the flag desecration “broke the law.”

“I believe that child does need to be punished in some way – absolutely,” he said. “I can’t take a picture of them and in turn they cannot do the same of me.”

I’m not sure what law Francis thinks exists, but students can absolutely take pictures of their teachers and vice versa. A school could prohibit taking pictures if they think it’s unconducive to a learning environment, but there’s no legal barrier to photographing people on public property where there’s no expectation of privacy (like in a classroom with dozens of kids). The right to photograph people in public settings is just as much covered by the First Amendment as the right to desecrate a flag.

Why, it’s almost as though his brave flag-stomping wasn’t motivated by a deep, abiding respect for the freedom of expression at all.