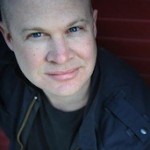 Last week’s spat between the rapper M.I.A. (born Maya Arulpragasam) and New York Times writer Lynn Hirschberg was as entertaining as it was nasty. But it is worth noting their vitriolic little two-step is actually the result a deep moral agreement. That is, both M.I.A. and Hirschberg buy into one of the most harmful cultural myths of modern times, which we can call “the authenticity hoax”.

To recap the events so far: M.I.A submitted to a lengthy profile for the New York Times Magazine, which was written by Hirschberg. M.I.A. didn’t like the way she was portrayed, and subsequently tweeted Hirschberg’s personal phone number in revenge. She (M.I.A) also complained that she’d been quoted out of context (which the Times admitted and subsequently corrected) and put online some clandestine recordings she’d made of the interviews with Hirschberg, that showed that the Times reporter had been less than scrupulous in her reconstruction of events.

Hirschberg’s central concern in the profile is to explore M.I.A’s artistic authenticity, which is a question that dogs virtually all successful artists and musicians at some point in their career. To give just a couple of recent examples, The Strokes were widely derided as trust-fund babies who had no right to their Lower East Side borrowings, while the revelation that Avril Lavigne actually couldn’t skateboard was almost as scandalous as the discovery that none of the Beach Boys knew how to surf. 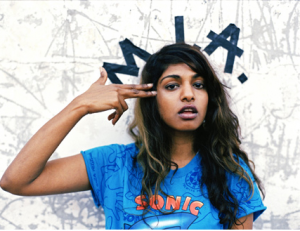 The underlying assumption is that your racial background, your upbringing, and your current lifestyle frames the scope and limits of what you can legitimately claim to sing, paint, or write about. In the case of M.I.A., the question is whether she is entitled to the radical politics that drive her music, in particular the way she uses her music to advance the cause of the Tamil Tigers.

On the face of it, her fervour seems legit. M.I.A. was raised in Sri Linka but moved to London when she was 8, while her father stayed behind to keep working with Tamil militants.  Yet while much of Times profile is interesting enough and pretty straightforward, Hirschberg gets in enough digs to make it clear that she doesn’t think much of her subject’s limousine-terrorist schtick. For example, when describing M.IA.’s relationship with Ben Bronfman, son of Seagram’s heir Edgar Bronfman Jr., her tone is almost gloating.

But where Hirschberg really makes her agenda plain is in passages like this:

Maya’s tirade, typical in the way it moved from the political to the personal and back again, was interrupted by a waiter, who offered her a variety of rolls. She chose the olive bread.

Unity holds no allure for Maya — she thrives on conflict, real or imagined. “I kind of want to be an outsider,” she said, eating a truffle-flavored French fry.

Okay, we get it — M.I.A. is a hypocrite. Here she is, trying to play up her family’s Tamil gangsta cred while drinking white wine and eating yuppie fries and olive bread in a fancy restaurant in Los Angeles. And this is the age of authenticity, where an artist is only entitled to those forms of personal, artistic, and political expression that are properly underwritten by their background. If you don’t live it, you can’t say it, and a hypocrite is the absolute worst thing you can be. 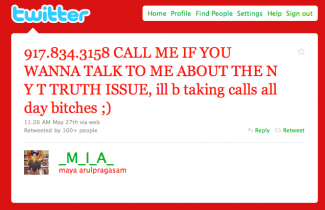 The problem is that M.I.A. herself buys into the authenticity hoax. This drives her to counter the charge that she’s a hypocrite or a sellout by ramping up the “political” dimension of her art and her persona – she needs people to see that for all her money and security, she’s still Maya from the ‘hood. And so we get her recent video for the song “Born Free”, which features what appears to be an American SWAT team hunting down and killing red-headed males. Politically, it’s completely obtuse, but it is pretty much what happens when the need to be seen as “radical” overwhelms all other artistic considerations.

Hirschberg summarizes M.I.A.’s dilemma thusly: “What Maya wants is nearly impossible to achieve: she wants to balance outrageous political statements with a luxe lifestyle; to be supersuccessful yet remain controversial; for style to merge with substance.”

One wonders what planet Lynn Hirschberg is living on. There is absolutely no tension between balancing radical politics with high living, no difficulty in making style into a political statement. Just the opposite: the selling and marketing of non-conformity – what’s been called radical chic, or the rebel sell, has been the very essence of our culture for decades. The point has been made over and over again, by everyone from Tom Wolfe to Thomas Frank, but for some reason Hirschberg seems to have missed the memo.

The issue is not whether or not an artist can successfully combine his or her radical politics with a high-flying lifestyle of privilege and luxury. No, the real question is whether the combination of art and politics is helpful to either side. After over forty years of radical chic, the best evidence we have is that it merely defangs the radicals, and takes all the intelligence out of art.

Andrew Potter is the author of The Authenticity Hoax: How We Get Lost Finding Ourselves, published by HarperCollins.