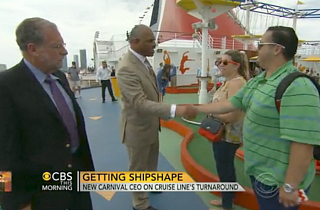 For Carnival Corp., which is still struggling to recover from its Costa Concordia and Carnival Triumph debacles, it is nice to have friends in high-profile media roles.

Just consider today’s spectacle on CBS This Morning where Peter Greenberg, the network’s travel editor, leads Carnival Corp.’s new and obviously tone-deaf CEO, Arnold Donald, on what can only be seen as a public relations recovery tour for Carnival’s brands.

In the TV segment (embedded below), Greenberg interviews Donald, and the journalist references the February 2013 Carnival Triumph incident, which saw an engine room fire that left thousands of passengers and crew adrift in the Gulf of Mexico for days without power, saying:

“The good news with the Triumph is you got the fire out and nobody died.”

Donald, a Carnival board member who took on the CEO role a couple of months ago when Micky Arison was kicked upstairs and retained his chairman’s position, incredibly characterizes the Carnival Triumph incident like this:

“Not only did no one die, no one was hurt,” Donald says. “No one got sick. So there was no safety/health issue involved with the Triumph at all.”

Donald should try that line out with passengers on what came to be known as the “poop cruise” as they were “using mobile phones to convey tales of carpets soaked in urine and passengers sleeping in tents on deck.”

The passengers went without basic services, including hot food, for days as the disabled ship was towed toward port in Alabama.

Donald’s statement that there were no systemic or safety problems with the Carnival Triumph flies in the face of what Greenberg touts as Carnival’s $600 million fleetwide refurbishment project to install backup generators, and make fire safety and other enhancements.

If anything speaks to a systemic problem, then that does.

In addition, perhaps Donald hasn’t caught up on his background reading yet. The Coast Guard report on a November 2010 Carnival Splendor fire found lapses in that ship’s engine, electrical, drainage, fire-safety and training systems, and concluded that all of Carnival’s Dream-class ships were similarly vulnerable.

The Carnival Triumph admittedly isn’t a Dream-class ship, but some of these shortcomings would undoubtedly apply.

Greenberg incredibly doesn’t challenge Donald’s assertions that the Carnival Triumph mishap was an isolated incident, and didn’t amount to a health or safety issue.

In fact, Greenberg doesn’t challenge Donald on much else, either, and accompanies the CEO through various Carnival operational facilities designed to show that the ships and brands have been righted.

In so doing, Greenberg glosses over Carnival’s serial blunders, including those involving the Costa Concordia, the Carnival Splendor and the Carnival Triumph, and really that’s just to mention a few of them.

“Despite the bad PR, the statistics are overwhelmingly in passengers’ favor,” Greenberg volunteers during the segment.

Donald responds right on cue, saying “far less” than 1% of Carnival’s passengers experience such horrific situations (our words, not his), as occurred on the Triumph.

Greenberg does reference the fact that the Carnival incidents have not only hurt Carnival, but have adversely impacted the entire cruise industry, and that Donald’s role now is to reposition the Carnival brands and to fill ships.

Greenberg and CBS This Morning are helping with that repositioning.

In Carnival’s second quarter, which ended May 31, the company reported that gross revenue yields fell 3.1% year over year, and Carnival said of its outlook for the rest of 2013:

Although Greenberg certainly has reported on some of the cruise lines’ recent transgressions, he’s come to their defense both in the Donald interview, and recently on his own website, and in social media.

In early August, PeterGreenberg.com ran a piece from Ross Klein of CruiseJunkie.com on What the Cruise Industry Isn’t Telling You: Crime Stats Explored, an article contending that the cruise lines, in newly reporting onboard crime, are trying to minimize the problems.

A few days later, PeterGreenberg.com ran the cruise industry’s answer to Klein in a piece, What the Cruise Industry IS Telling You About Allegations of Crime, from Cruise Lines International Association’s (CLIA) CEO Christine Duffy.

Greenberg issued a couple of tweets on the cruise lines’ crime-reporting the next day.

But, later in the day, Greenberg, well, set the record straight.

Here’s Greenberg’s CBS This Morning piece with his interview of Donald. Judge for yourself:

—
This piece originally appeared at skift.com. Skift is a travel intelligence company that offers news, information, data and services to professionals in the travel industry and professional travelers to help them make smart decisions about travel.