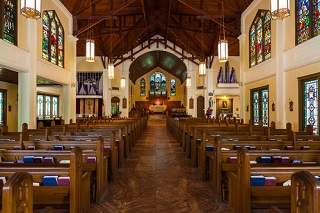 Yesterday, the Episcopal Church voted to allow their clergy to perform same-sex marriages in the church, but it didn’t come without a heated debate.

It ended in a compromise that has both the liberal and conservative wings of the church slightly unsatisfied, but the bottom line is that a church has stated, explicitly, that it will allow same-sex marriages to be performed with its full blessing. It’s a triumph of the First Amendment, even as the term “religious freedom” because a buzzword for conservatives to mask discrimination against the LGBT community: the Episcopal Church choosing on its own to debate and hold a vote, and then compromise on an agreement, is the truest expression of religious freedom.

Of course, it’s not an across-the-board, mandatory order for all clergy to perform same-sex marriages even if they don’t want to. If a city’s diocese doesn’t want to allow the marriages, they can opt out. Further, if a bishop doesn’t want the ceremonies, he could forbid his clergy from performing them. This is where the liberal Episcopalian bishops bristled, basically saying that if the church is going to give its blessing to same-sex marriages, the whole entire church should follow suit. The conservatives who wanted the opt out were thankful for the compromise, but those clergy who don’t want to perform ceremonies had to pass a couple on to someone who would accommodate them.

Same-sex marriages can take place in the Episcopal Church — in the churches that elect to allow them — on November 1.

The debate will definitely continue, as it likely will in other churches throughout the country. However, legally speaking, marriages between two consenting adults of any gender can take place all over the country. This is exactly how it should be because despite the symbolic, spiritual marriage that takes place in a church, couples still need a legal marriage license. A church wedding without that license is invalid. However, because churches in America are not expressly beholden to the government, they don’t have to follow such a law. They, like the Episcopal Church, can work it out for themselves. The law can’t discriminate, churches can.

People, on the other hand, the religious ones who run businesses that serve the public and pay taxes? If they’re going to discriminate against a certain community because of their religious beliefs, then they’d better try to become a church. But they should remember that the guy who did that never mentioned discriminating against people who were different.

Besides, why would any business refuse business? Why limit your customer base? That’s just bad practice.