The GOP is Keeping Government Closed to Stop Its Own Ideas 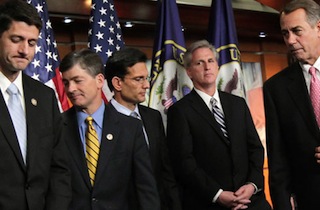 The conflated fight over funding the government and raising the debt ceiling found some welcome focus on Monday as, much like Columbus Day’s namesake, congressional leaders shambled toward a destination for which they’d never been aiming. As the day progressed, various rivulets of the GOP coalesced around two different proposals: the Vitter amendment, which removes Congress’ supposed advantage in Obamacare, and a repeal of the medical-device tax.

This is a ridiculous place for the GOP to have ended up. A fight that began over defunding the Affordable Care Act and then became all about spending, to the point that Representative Paul Ryan (R-WI) even reprised his old standard Entitlement Reform in A Minor, has arrived back at two small demands, one of which is the repeal of a GOP-induced policy, and the other of which runs completely counter to the GOP’s stated principles. We have halted the government and threatened default so the GOP can stop its own ideas.

First, the Vitter Amendment, which caught on two weeks ago when House Republicans passed a continuing resolution calling for congressional staff to lose their alleged special status under Obamacare (it failed). This improvised demagoguery has been repeated ad nauseam ever since, as when Jim Jordan (R-OH) and Tim Huelskamp (R-KA) complained about “equal treatment” on the Sunday shows yesterday; here’s Ryan parroting the line just this morning. After all, if regular Americans receive no special handouts, why should members of Congress, right?

This is bunk. It’s such bunk that Washington Post’s Ezra Klein and National Review’s Patrick Brennan wrote practically interchangeable articles calling it bunk, a rare moment of October bipartisan agreement. Here’s my own summary from exactly two weeks ago:

During the original debate over ObamaCare in 2009, Senator Chuck Grassley (R-IA) introduced an amendment that would force congressional staffers into the ACA’s exchanges, which were meant for individuals, not large employers. Grassley expected the Democrats to kill the amendment, thus allowing Republicans to claim even Democrats in the government didn’t want ObamaCare. But the Democrats accepted the bill, creating a second problem: would the government continue to contribute to the employees’ health coverage under the exchanges, which employers were not supposed to do, or would congressional staffers be eligible for taxpayers subsidies?

Nobody wanted the latter, so eventually the Office of Personnel Management allowed the government to contribute, as otherwise congressional staffers would essentially be punished with a massive pay cut. This is the “exemption” that so many conservatives have been fighting.

Just after House Speaker John Boehner (R-OH) led the charge to repeal this “exemption,” Politico revealed that he’d spent months lobbying behind the scenes to create it—knowing, no doubt, that without this “exemption” members of his and every other congressperson’s staff would be thrown under the bus. Yesterday, Senator John McCain (R-AZ) joked that the GOP’s popularity was so low that its membership was down to “blood relatives and paid staff.” The Vitter Amendment screws over that second group.

So this is the first of the GOP’s demands: reversing a congressional subsidy that was created thanks to a Republican senator’s amendment and fought for by the Republican Speaker of the House.

The second demand is the repeal of the medical-device tax. As many, including more careful conservatives, have rightly pointed out, this repeal is just a sop to the device manufacturers’ lobby, which wants the tax to go away for obvious reasons. And while the tax is unpopular amongst both Democrats and Republicans, it serves an actual policy purpose—unlike Grassley’s amendment—as neatly summarized here by MSNBC’s Suzy Khimm:

The medical-device tax is expected to reap between $28 and $30 billion over the next ten years. “The excise tax is one of several new levies on sectors that will gain business due to health reform,” the left-leaning Center on Budget and Policy Priorities wrote two weeks ago, when the repeal was gaining currency. “The expansion of health coverage will increase the demand for medical devices and could offset the effect of the tax.” In short, the medical-device tax was a relatively painless way of generating revenue. The right-leaning Washington Examiner’s Tim Carney went even further, arguing that the tax will easily be absorbed by device manufacturers’ gaudily-large profit margin. Again, we see bipartisan agreement that the GOP’s demand is an empty talking point rather than any sort of substantive reform.

More to the point, the tax is one of the ways Obamacare was supposed to remain deficit neutral; without it, that $30 billion goes back into the deficit. As the GOP’s standoff over the continuing resolution bled into the debt ceiling last week, focus turned to 2011-style rhetoric about out-of-control deficits (which are rapidly falling, but never mind). The GOP is now refusing to open the government/raise the debt ceiling in exchange for a provision that will add $30 billion to the deficit, all to teach Washington a lesson about rising deficits. That makes literally no sense.

Of course, the real reason either of these proposals are on the table is that the GOP, having started this absurd and disastrous fight, needs something to show for all of it; a complete defeat would be devastating to what little unity the party has left. These are the only two proposals that Democrats could feasibly agree to without further incentivizing governing-by-artificial-crisis. But the GOP’s need for a concession doesn’t make those concessions good policy. And if the Republican Party really held the government hostage for three weeks only to achieve a policy change that goes against its own stated objectives, then they deserve every percentage point drop in the polls that they get.