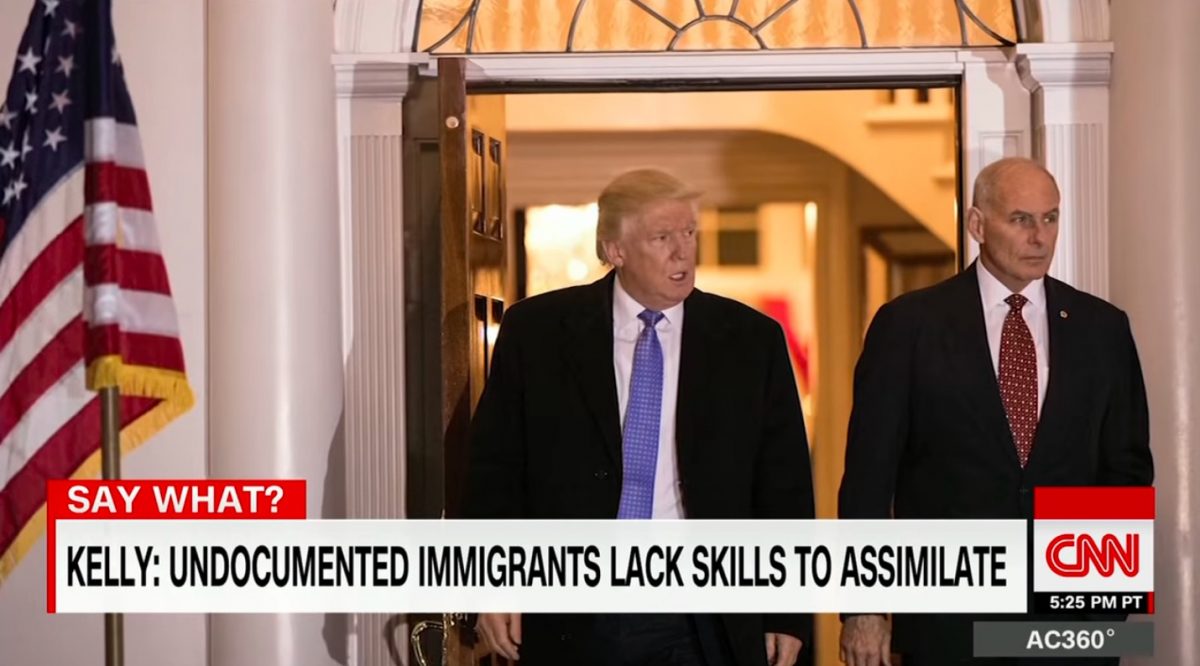 Last week, White House Chief of Staff John Kelly took a lot of media flak for suggesting that the majority of illegal immigrants are creating an assimilation problem while adding very little value to our workforce. Since then, the captain of Trump’s pom-pom squad, Tomi Lahren of Fox News, has been a target of the media for trying to carrying Kelly’s ball down the field, and, at times, fumbling it.

Usually, I am lukewarm on Kelly and have disdain for Lahren. In this case, however, the media is mostly wrong in their attacks on them, because the press appears to be rather conveniently living in a time warp.

To be clear, there is no doubt that what both Kelly and Lahren said is, at least in part, in contradiction to both the principles and the reality of the role in which immigrants have played in the building of this country. Both of them have even been mocked because some of their own ancestors seemed to live in contradiction to their current standards for immigrants.

This criticism is based on the “Statue of Liberty” era immigrant, when we welcomed the “tired, poor, and huddled masses” so that they could build a new beginning in this land of opportunity. If nothing at all had changed since then, the media would be 100% correct in charging Kelly and Lahren with blatant hypocrisy, and maybe even racism.

The problem is that today’s immigration reality has almost nothing in common with that time period, and that has nothing to do with the vast majority of those being referred to having come from Mexico.

First, those who came to Ellis Island did not do so illegally. They came into the port and were recorded and accounted for. This is fundamentally different than the millions of people who have entered this country illegally over the past generation by sneaking across our southern border. We have little idea how many of them there are.

Second, those who came during the “Ellis Island” period did so with every intention of finding a job and sustaining themselves and their family, mostly because they had almost no choice but to do so. This is not always the case today, not because of the race or origin of those entering the country illegally, but because of the radical changes in the role of government in our lives.

Today, we live in a country with a massive welfare state which acts both as a safety net for those who come on hard times, but which is also so large that it can provide a magnet for those who live in squalor to come here for what is, in comparison, an easy life.  And make no mistake, many of these benefits are now available to people whether they came here legally or illegally (sometimes it even benefits a person to be here illegally when they try to game our system because they don’t always pay taxes, and cannot be easily tracked down).

Third, while there were many people who came here in the “Ellis Island Era” who lived in communities with others from their country of origin and were slow to learn English, there are several new factors which exist today that enable less cultural assimilation than would be ideal. For instance, today major television, radio (thirteen different stations here in Los Angeles currently bill themselves as either “Spanish” of “Mexican”), and newspaper outlets give Hispanics information about only their original culture in only their home language.

There are also now public schools and election systems which bend over backwards to cater to those who have not yet learned English. I have personally experienced numerous environments, many of which were paid for by tax money, where I felt like it was difficult to discern if I was in the United States or Mexico.

Having lived in in Southern California now for almost fifteen years, this last issue is probably the most aggravating.

I honestly could not care less what race an immigrant is, or what country they came from. While I am against the idea of rewarding illegal immigration–partly because it is unfair to those who come here legally—I am even realistic enough to realize that battle has long ago been lost to the forces of political correctness.

All I ask is that those who come here at least be forced to obey our laws, make a good faith effort to learn our language (laughably, according to California law, English is the official language of the state), and try to contribute to the work force. Many illegal immigrants do exactly that, however, largely thanks to human nature, because there is now very little disincentive for them to not do these things, too many simply never do.

We can and should have a real debate about whether the factors which have led to this new reality should be altered (one of President Trump’s greatest failures from a conservative perspective, ironically, is his complete inability to translate his election victory into any meaningful change on the very issue which ignited his campaign). However, the media should not pretend that the factors surrounding immigration haven’t been radically altered since the “glory days,” all so they can score some cheap points in this never-ending game of political correctness and virtue signaling.