The Opponents Of The Cordoba House Demonstrate Its Need 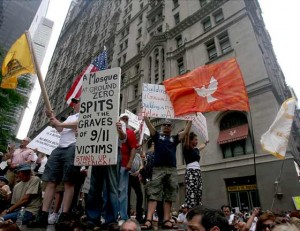 A few years ago I sat in on a meeting between a prominent Washington journalist and a group of foreign reporters. The journalist told the group that few Americans, even members of Congress knew the difference between Sunni and Shi’a Islam. One of the journalists, who was from a predominantly Moslem country, thought this quite amusing. In my own mind, I was thinking about the number of times that I was asked by non-Christian visitors to give a quick explanation of the difference between Catholicism and Protestantism (and I was raised Jewish). It was a proud moment for me when two weeks later I ate breakfast with two of those journalists in a coffee shop in Minot, North Dakota and overheard two older gentlemen at the next table over discussing the differences between Sunni and Shi’a Islam.

I’ve been thinking about this experience in recent weeks as the debate rages over the proposed Cordoba House that is planned to be constructed two blocks from Ground Zero. Amongst the center’s purposes is to promote interfaith dialogue and to improve public understanding of Islam. I can forgive the ignorance of the crowd that is trying to stop the construction of the center. What I can’t forgive is the willfulness of the ignorance. The strange lack of interest in learning about Islam shows in every statement the band of loudmouth rabble-rousers make. Imagine if a group of Quakers tried to build a meeting house near a Muslim shrine. You could be sure that they’d be branded as Christian missionaries out to destroy Islam by many. The very same people that are now opposing the Cordoba House in New York would be yelping about the breathtaking ignorance of “The Muslims” and railing about such anti-Christian bigotry.

I recently worked in Tajikistan, which has one of the world’s largest populations of the Ismaili subsect of Shi’a Islam. The Ismailis are renowned for their acts of charity through the Aga Khan Foundation and their emphasis on self-improvement through education. While in Dushanbe I toured the Ismaili Center, which is larger and grander version of what is envisioned in New York. The Ismailis don’t build mosques. They build education centers that have a small prayer room at their core. I learned that Canada has the second largest Ismaili population in the world. As my blue jean clad, non-head scarf wearing interpreter explained Ismaili beliefs, I was struck by how similar they were to Unitarians and Quakers. I was also struck by the fact that if I merely used the word “Ismaili” back in the U.S. any number of people would immediately assume I had visited some sort of branch of al-Qaeda.

I’ve thought of this many times as I listen to this debate and hear people talk about “peaceful Muslims” versus “radical Muslims” or simply “The Muslims”. Would Sarah Palin and Newt Gingrich talk about Baptists as “radical Christians”? Are Mennonites “peaceful Christians”? How about secular Christians who don’t consider faith central to their lives just as some secularized Muslims do? They undoubtedly know the difference between Mormons, Amish, Catholics, Greek Orthodox, Presbyterians, Methodists, and Pentacostalists. Do they know the difference between Sufis, Druze, Salafis, Wahabis, and Ismailis? Do they not care or do they simply think it doesn’t matter? Would Rep. Eric Cantor (R-VA) and Sen. Joe Lieberman (I-CT) refer to Lubavitcher Hassidics as “Radical Jews” and Reformist or Reconstructionist Jews as “Peaceful Jews”?

Of course, many of the opponents, such as Sarah Palin, protest that they have nothing against “peaceful Muslims”. Oh really? Try telling that to the Ahmadiyyahs. The Ahmadiyyahs are a small Islamic sect that are considered to be heretics by many in Indonesia and Pakistan where most of them live. In Pakistan, they are officially considered not to be Muslims. The Ahmadiyyas have been and continue to be victimized by extremist elements and even at the hands of some government officials in Indonesia. Many Ahmadiyyahs have been murdered by extremists. In short, they are “peaceful Moslems” who have a lot more experience dealing with Al-Qaeda types than most Americans do. Yet, when these “peaceful Muslims” tried to build a community center in Walkersville, Maryland in 2007 the result was a firestorm of controversy which included any number of locals expressing concern that the Ahmadiyyas, who are frequent targets of terrorism, were going to use the center as a cover to bring terrorists into this country. The Washington area media trotted out the usual shorthand about a “Muslim” group and opponents and supporters of a “Mosque” (sound familiar?). Nowhere was there any mention of Ahmadiyyas views, or why they wanted to build a center, or about the persecution Ahmadiyyas face at the hands of Muslim extremists. The “Islam Watch” website warned about Walkersville being “besieged” by Ahmadiyyas. Ooo, scary! Eventually, the Ahmadiyyas backed down and the good people of Walkersville were spared the scary prospect of Muslim victims of al-Qaeda visiting their town. I’m sure if the peaceful Ahamdiyyahs were trying to start a center four blocks from Ground Zero they would be getting bashed all around.

In my view though, there should be a special place in hell for political consultants like Ed Gillespie and Ed Rollins. On the August 15th edition of CBS’ Face the Nation they disparaged President Obama’s defense of the Cordoba House as “disdainful of the American people” and generally bad politics. Apparently, demagoguery, fear mongering and ignorance are good politics and trying to appeal to the better nature and instincts of the American people is just terrible politics. America has thankfully been spared the horrors of religious base fratricide, but one can be sure that if it should happen in this country it will be due to the likes of Rollins and Gillespie and other political consultants who think that playing to popular fear of “The Other” without given any thought to the possible tragic results is just dandy if it gives you an election year advantage.

The critics of the Cordoba House are doing an excellent job of demonstrating why the center is in fact needed. The need for more education and interfaith dialogue is on display. Here is my hope. I hope that when the Cordoba House is finished that the first tour is given to Sarah Palin, Newt Gingrich, Glenn Beck, Rush Limbaugh, Joe Lieberman, Eric Cantor, Harry Reid, and several FOX news producers. Duct tape is kept handy to tape their mouths shut if need be. Over the course of the day they are given a crash course on the different sects and subjects of the Islamic faith and where they all fit in the modern world. They will have to sit and listen patiently to Muslims from all walks of life, including completely secularized one.

When the day is over, Professor Newt Gingrich is forced to pass a written exam on the subject before he is allowed to leave the building. If he is the true intellectual that he is claiming to be, then he should actually enjoy such treatment.

Sen. Lieberman should go to Congregation Mishkan Israel in New Haven. It was called “a defeat for Christendom” by the “New Haven Register” when in 1843 it became the first synagogue in Senator Lieberman’s state of Connecticut. While there he should apologize for having forgotten the bigotry and intolerance that Jews have had to contend with historically. Rep. Kantor should visit Northern Virginia Hebrew Congregation in Ashburn, Virginia, which doubles as a mosque, and do the same.

Senator Harry Reid (D-NV) and Glenn Beck can be sent to Independence, Missouri where they can visit the spot where Governor Lilburn Boggs was assassinated by a Mormon. It was Governor Boggs who issued the order that “Mormons must be treated as enemies, and must be exterminated”. That order was not rescinded until 1976.

As for Rollins and Gillespie, I suggest that they be give a free tour of Bosnia. They could talk to the Muslim widows of Srebrenica and the Serb victims of Krajina. They can look at the war damage that has yet to be cleared and see the last of the minefields. This way they can see what happens when politicians decide to throw such quaint notions as religious tolerance to the wind and just pander to popular prejudices. Maybe they will learn that real political leaders are those who seek to build bridges rather than those who whip-up rabble rousing crowds.

They should all be required to take daily turns standing in front of the building to talk down the lunatics that are sure to show up for the purposes of doing people harm (for further reference see the Holocaust Museum).

As for the rest of America, they should take their cue from the two old gentlemen in Minot. They should keep their minds open and learn about others. I am confident that I don’t have to tell most Americans that. I hope when they visit New York that they will tour the Cordoba House and take the opportunity to engage in interfaith dialogue. Ground Zero and the surrounding area is the best possible location to be doing that.

Mitchell Polman has worked as a producer on State Department sponsored media projects. He frequently writes about public diplomacy issues. Mitchell has studied international affairs and specialized in Russian and East European relations. Additional articles by Mitchell may be found atUSCPublicDiplomacy.com and UnderstandingGov.org.