The Overton Window One Year Later: Did Glenn Beck Predict The Occupy Movement?

The Overton Window One Year Later: Did Glenn Beck Predict The Occupy Movement? 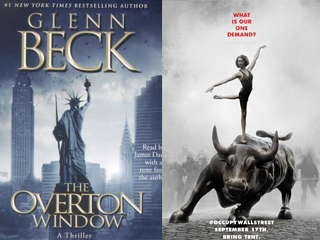 Many many months ago, when Glenn Beck, one of the highest-rated cable news hosts on television, released his first work of “faction” The Overton Window, our editors promised a “100-part” review of the novel to accompany Beck’s somewhat forgotten “100-year” plan that stole the headlines in summer 2010. They were kidding, of course, but I somehow find myself continuing the tradition upon giving the novel my first read this weekend, and finding that hindsight adds a context to it that surely was not intended, but renders the work that much more significant: the protesters in the novel who Beck described as a fictionalization of the Tea Party Movement resemble what we now know as “Occupy Wall Street” in ideology and problematic behavior far more than they do the 2009 explosion of right-wing activism the Tea Party represents.

Yes, Beck himself later renounced the Occupy Movement as dangerous, violent Marxist hordes, and his book certainly does not give credence to many of the solutions for the problem proposed by Occupy. But that doesn’t mean that the novel’s characters and core message aligns with Occupy so far as America’s problems lie.

The rest of the article will contain spoilers, for those of you who are still contemplating giving the novel a whirl in 2012 (and given the dramatic change in political scenery in the past year, it’s certainly worth a go).

The core of the plot, a year later, remains clearly a work of the right-wing: Noah Gardner, a powerful PR executive, somewhat unrealistically gets tangled up in a plot to nuke Las Vegas. It is never clarified exactly why the enemy (a combination of extremist right-wing elements and FBI agents– yes, FBI agents) chooses Las Vegas, just as it is somewhat unclear why it would take someone as savvy in the political and PR world as Gardner is about 48 hours to fall in love with a hopelessly– though somewhat unintentionally– insane temp at his agency.

The novel is laden with unnecessary screeds by characters who don’t seem to notice the reader falling asleep at their surprise harangues (think an Atlas Shrugged where every character is as starved for attention as John Galt), which is classic Ayn Rand in many ways. It is not Randian in the most seminal way, however: the option of “Going Galt” and leaving society as it stands is not acceptable to any of the purely moral characters in the book. Ross, the heroine of the novel, is directly asked why she does not retreat from society into the wilderness, and her answer is a lot more Dagny Taggart than John Galt– she has work left to do in the world, still. But ultimately, the ideology of the characters fail to fit neatly into the left-right spectrum.

Beck explains in his prologue that he leaves the traditional left-right ideology of the book somewhat unclear, because he sees the struggle as one of oligarchs or elites versus the masses. In 2011, we would call that the struggle of the 99% to wrest power out of the hands of the 1%. You can see where this is going.

For one, the villain in the novel is not a multi-millionaire environmental activist or White House official– most of the action doesn’t even occur in Washington, D.C. The politicians don’t matter. Arthur Gardner, the legendary PR executive and super evil arch-villain of the novel, goes as far as to declare those in political power irrelevant, so long as they are bought by Wall Street. “The majority of politicians are only prostitutes and puppets, and they always will be. Their simple-minded lusts for money, and sex, and power make them controllable, but they disgust me,” he tells his son. After waterboarding him. Did I mention how evil this character is?

So if the action doesn’t take place in Washington, D.C., then where do The Overton Window‘s villains go about their business? Lower Manhattan, of course, which also happens to be the most comfortable places for the patriots of the novel to organize and protest. The first scene where we meet the “Finders’ Keepers,” the Tea Party group of which the heroine Ross is a member, the younger Gardner directs his cab to Chambers St., a mere few blocks from Zuccotti Park. There, he finds that several headlining Founders’ Keepers leaders are speaking– the only time characters will launch into absurdly long speeches in this book with any legitimacy. The first speech, by Ross’s mother, does not highlight big government so much as separation of powers and the corrupting power of money. She tells the crowd:

“Corruption is a virus, always floating in the halls of power, ready to infect and spread among those whose immune systems are compromised by greed and blind ambition. This is the way it’s always been, and our system of government was made like it was, with a division of powers among three separate branches of government, all constrained by limited scope and common-sense principles. Our founding documents established this new form of government to protect us from the sickness that has destroyed freedom since the dawn of civilization: the inevitable rise of tyranny from the greed and gluttony of a ruling class.”

The greed and gluttony of a ruling class. Not a President who extends his executive tentacles far beyond where the Constitution permits him. Not shady internationalist groups working within the UN or other international bodies. Glenn Beck’s righteous group within his fictional storyline believe that marketing and public relations powerhouses– people who sell things and play with money for a living– are the real enemy. Ross’s mother goes on to conclude that the ultimate goal of the enemy is a “two-class society in which the elites rule and all below them are all the same: homogenized, subordinate, indebted, and powerless. That’s what corruption will do, and we’ve allowed it to run rampant for too long.”

The Tea Party was the first incarnation of a backlash against a conglomerate power that, perhaps in the waning hours of the Bush era, the American people didn’t quite understand as they did today. They saw an overreaching federal government and buckets of soft money pouring into political campaigns, but it took Citizens United, the TARP bailouts, and, perhaps, President Obama’s use of drones across the Middle East to activate the libertarian left as well as the libertarian right. In many ways, Beck’s fictionalization of the Tea Party appears familiar to the Occupy movement because Occupy is the natural evolution of a movement like the Tea Party. But there are indisputable ideological differences between the two, particularly in the emphasis each places on certain problematic troubles in this nation, and it is in there where it appears Beck had his finger on the pulse of a movement that, on his radio and television programs, he only saw vaguely as “the coming insurrection,” and not the patriotic uprising his imagination created. Neither Occupy nor Beck will likely take the comparisons too well, but it’s hard to see how the two couldn’t find some common ground by reviewing a text that preceded Occupy by a good year.