To Conservatives, The Tea Party Has Become The Terrifying ‘Mind Power’ Boy From The Twilight Zone 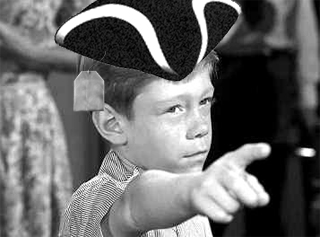 Yesterday morning, I was writing up the clip of Glenn Beck and his radio co-hosts tearing into John McCain over his “Tea Party Hobbit” comments and I was kind of amazed by how harsh they were. Sure, after their respective losses, Liberal voters spent a lot of time making fun of how “boring” John Kerry was and how “really boring” Al Gore was, but the responses McCain was getting from all sides seemed swifter and more pointed. Then, after reviewing the clip of McCain trying hard to clarify his comments on Hannity, I realized this had less to do with the Senator and more to do with the utter fear Conservative politicians and media figures have for the Tea Party right now. And, with all the Lord of the Rings references flying around, I’ve decided to make a geeky analogy of my own.

The Tea Party has become to Conservatives like the character Anthony in the “It’s a Good Life” episode of The Twilight Zone.

If you don’t recall, the episode, based on a short story by Jerome Bixby, tells of little Anthony Fremont, a six-year-old boy who has the ability to do terrible things with his mind. He can create amazing things but he can also kill at will, forcing the adults around him to constantly think and say nice things about him because, at any moment, he can destroy them, sending them off “to the cornfield.” It’s not that he’s evil per se. He just has this incredible power and doesn’t really know the implications of what he’s doing.

Watching on The Five as Greg Gutfeld and Andrea Tantaros rush to counter anything negative Bob Beckel might say about the Tea Party, one can’t help but think of the adults in that episode. I keep waiting for them to turn and start talking to the camera: “Don’t listen to him, Tea Party. It’s a good thing you did! A very good thing! We shouldn’t raise taxes for anybody at all no matter how broke the nation is! You’re such a clever party!”

Conservatives know how powerful the Tea Party is and they seem terrified to say anything the slightest bit bad about them. They’re treating the party just like an infinitely powerful child, walking on eggshells at all times (quickly denouncing McCain was the Tea Party version of not letting that guy play his Perry Como record because “Anthony doesn’t like singing”). The thinking seems to be that any critique, no matter how benign, could send the Tea Party into a rage, quickly leading to death. The 2012 presidential election version of death that is.

And can they be blamed? Just look at how many news stories there are about some Tea Party leader announcing plans to vote a Republican out of office for daring to compromise in any way. To the cornfield with John Boehner! Who cares that he’s supposed to be our Speaker of the House!

And so the debt debate rages on, thanks in part to the Tea Party (Heh, no, just kidding! It’s all Obama’s fault! He’s a bad man! You did a good thing! A very good thing!). All I know is that I turn on the TV every day expecting to see that Bob Beckel has now been transformed into a jack in the box.

It’s a good thing you voted down the plan! A very good thing! And tomorrow is going to be a good day!

Below is a video we made that will help make the comparison a bit more clear: