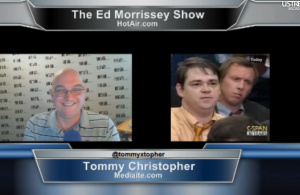 Mediaite’s Tommy Christopher — the lefty you love to hate…or just love — has been busy the last few days, fighting off horrifying allegations that might fell a lesser man. In one of the most ridiculous and occasionally amusing uses of internet bytes:

-A tiny blog called Fishbowl DC wrote a negative-ish story about Tommy.
-Tommy was quoted saying something nasty about the guy who seems to have pitched the story.
-The “story pitcher” retaliated by writing a new post on his far bigger blog, Daily Caller, questioning why Tommy uses a pen name.
-The site that wrote the original article picked that new story up, and then wrote another.
-A small war erupted on Twitter.
-And, just when the dust seemed to have settled, Fishbowl DC published its fourth story in two days on Tommy, this one from a blogger using a pseudonym, referring to Tommy as “the hypothetical White House correspondent.” One thing we know for sure: whatever his name is, he’s definitely an actual White House correspondent.

From our vantage point, we are just thrilled that Mediaite’s “Tommy C” is important enough to warrant all this attention. Good on him.

For anyone who cares (yes there are apparently a tiny handful who do), he does business legally under the name “Tommy Christopher,” we knew about the pen name, the Secret Service knows his real name, he uses it to sign in to the White House, he can legally cash checks made out to “Tommy Christopher,” and when we are mad at him we call him Christopher. Honestly we could not care less and are happy for our Tommy.

So why does he do it? The fans? The stalkers? The Feds? On Tuesday, Tommy appeared on The Ed Morrissey Show to answer those burning questions (by the way Tommy is his real first name). While not all of this totally makes sense to us, we love Tommy and his tenacity.

Enjoy the episode of The Ed Morrissey Show below, courtesy of HotAir.com (Tommy comes on at the one hour mark):