Townhall.com Will Will No Longer Slime You, Spam You

Townhall.com Will Will No Longer Slime You, Spam You

A PSA from Mediaite: On Saturday, I engaged with some healthy debate with my friend and colleague from across the aisle, Matt Lewis on the subject of President Barack Obama‘s address to schoolchildren today. I wrote: “President Obama Is Coming For Your Children“; he wrote a vigorous response on Townhall.com… which I would link to had it not triggered about a ZILLION AND A HALF spam windows.  Suddenly, my computer went haywire,  announcing the scary presence of Trojans and worms and whatnot (meanwhile, I thought Trojans were supposed to leave you protected!) It wasn’t just me and my terrible PC, either; it happened on a fancy Mac, too.  See the scary screenshot which left me panicky and freaked out below: 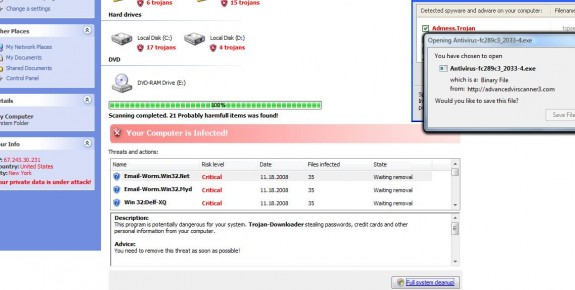 The trigger was to download a bunch of stuff, which of course I did in my panic and which my wiser friend advised me to DELETE immediately. So far, I will cautiously say that disaster has been averted (which is good because I needed my computer to make VERY IMPORTANT SLIDESHOWS OF ATTRACTIVE PEOPLE).

Matt reported it to the Townhall folks forthwith;and posted his post safely on his own personal blog. I posted my response to that (“Save The Children! Obama Is Coming For Their Brainz“) and we all had a fruitful Saturday. According to Twitter user Rachel K., the malware was quickly fixed. So, good quick work, Townhall! If it’s all the same to you, I don’t think I will check.

Upshot: Conservative websites will not leave you you oozing and infected! Now if we can just get Andy Levy to say the same about Mediaite, all will be well.