Trump, Not Hillary, is Trump’s Toughest Opponent in an Election He Can Win; Here’s Why
Opinion

Trump, Not Hillary, is Trump’s Toughest Opponent in an Election He Can Win; Here’s Why 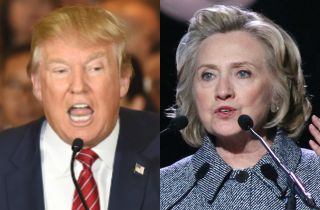 For those who love political entertainment, you’re about to get exactly what you wanted:

For many who vote Democratic, dreams of controlling the White House for 12 and even 16 straight years following President Obama’s eight now looks like almost a sure thing (if, of course, Clinton survives what Ron Fournier dubs The FBI Primary). After all, how the hell is Donald Trump going to get remotely enough votes from African-Americans and Hispanics to even make this a horse race? And even if Trump can snare a relatively decent amount from those two categories, how exactly can he win with more than a few Republicans horrified by the tactics and tone he’s dismantled 16 other challengers as swiftly as he has to this point? Goldwater 2 is just one way Democratic strategist Anita Dunn described this contest on Bloomberg TV just yesterday… and it certainly won’t be the last time you hear Barry’s name mentioned as it pertains to Trump’s chances this season.

So was Hillary prophetic when she made her personal email address HRC17? (her initials plus the year she would assume office). On paper, it sure appears that way. But this isn’t an on paper kind of election year, now is it? It makes me think back to about one year ago watching Reliable Sources (Brian Stelter’s weekly media analysis program on CNN) and a segment titled Trump’s Fifteen Minutes May Be Up. At the time, I remember agreeing with guest McKay Coppins — a fine writer for Buzzfeed — and his perspective of a possible Trump candidacy (he wouldn’t announce until four months later). Notable quotables from the late February 2015 appearance by Coppins include:

“What is it that makes this billionaire who’s already famous, already rich, obsessed with getting the political class to take him seriously? Coppins said in describing a recent column on the same topic. “My conclusion was at the end of the day, he’s already done real estate, he’s already done reality TV, he has fame. What he wants is credibility. What he wants is for at least some segment of the population to look at him as a serious person. The great tragedy for him is that he doesn’t know how to do that.”

“The key distinction is he thinks this (floating a possible run again) somehow gets him credibility. The fact is, everybody pointing and laughing at him does not make him a more credible figure.”

Again, I mostly concurred with Coppins here, and he and I certainly wasn’t alone in our assessment (more in a very solid majority if anything). The common thought process was that Trump would (again) walk up to the presidential pool without diving in. Reasons for not running would likely include something around not choosing to release his financials, as had seemingly been the reason in the past. But on June 16th, he did announce. He would release his financials relatively soon thereafter. And in the many days and months after, he was laughed at just as it was described by Coppins above.

But then the poll numbers began eclipsing the likes of Jeb Bush and Scott Walker (remember them?) quickly as July wore on. The Summer of Trump — which included what appeared to be a disastrous Fox News debate performance in August — which prompted weeks of personal attacks by the candidate on co-moderator Megyn Kelly for what many felt was a fair question around past statements he had made about certain women — somehow turned into the Autumn of Trump with new frontrunner gaining steam. And seemingly every minute on cable news, we kept hearing about the coming implosion, Joe & Mika’s consistent lucidity on Trump’s strong poll numbers showing he wasn’t going anywhere on MSNBC’s Morning Joe notwithstanding.

So even as said poll numbers showed him being the clear front-runner in October, the conversation, the gloomy narrative around his chances, still hadn’t changed. And when it appeared Ted Cruz was making a run at him and Trump was falling back a bit (albeit, while still comfortably leading), the questions being asked of him included if he was considering dropping out of the race. But a few months later, when Iowa saw Trump nearly finish third and Marco Rubio seemingly positioned perfectly to save the establishment’s day, the freight train got back on track: New Hampshire margin of victory: 20 points. South Carolina: 10 points. Nevada: 22 points. Super Tuesday: seven more states with an average margin easily in the double digits, with four of those seven victories coming by 18 points or more. The joke was now a juggernaut.

In the span of a few weeks, Trump went from wobbly and mocked again to basically locking up the nomination despite almost every establishment politician and pundit begging the public to dismiss him. But Trump supporters — who are as loyal as they come — and the new voters he’s bringing in seem to feed off the resentment they feel from those in government and the usual talking heads telling them how they should think. In the process, bad press somehow becomes good press because of the media’s own issues with trustworthiness and likability.

In the end, those jumping to Trump only see all the controversies he’s at the center of as blown out of proportion in an effort to take their guy down. And perhaps you’re seeing the same thing, but there is so much snarky press around Trump right now, we’ve gone past it having any real effect and is already in numbing-to-the-point-of-boring stage.

Laura Ingraham described Donald Trump as a movement candidate long before it was fashionable to do so; there isn’t a better way to describe his candidacy. And if you’re on Team Clinton because she’s a vessel to keeping your party in power for 4-8 more years, don’t start measuring the drapes just yet. Because the usual on-paper rules don’t apply here: for starters, fact-checking is apparently pointless because he’s Teflon Don. Those who love Trump do so for his candor in terms of the way he presents himself as a symbol of strength, not because the content is 100 percent accurate. And if Hillary tries to play the honesty card, that’s a non-starter if there ever was one given her untrustworthy numbers are somehow higher than his.

But there was one instance in this primary season when Hillary and Trump really truly clashed: That time back in December when she called him “sexist”. If you recall, this didn’t end well for Team Clinton, not one bit.

And that’s because Trump went where opponents aren’t supposed to go… directly at Bill Clinton by broaching accusations of sexual harassment/abuse directed at him by more than a few women in the past… all while calling out Mrs. Clinton for supporting such a man in the process. Know this: The Clintons love a good fight, particularly when they get to play the victim, but you’ll never see a campaign back off as quickly as theirs did after Trump went there and promised to act like a dog not letting go of a frisbee if they dared to call him sexist again.

And that moment — in a nutshell — shows why this won’t be the cakewalk, the sequel to Goldwater — many Democrats believe this will be. Go after Trump on his tax returns, he counters with demands to see those $625k speeches to Goldman Sachs. She says she’s going to create jobs for the middle class, he can say he created actual jobs in real life while labeling her as classic establishment.

Underestimate Trump at your own peril. He’s been overlooked and dismissed since June 16 and even up until South Carolina recently. He then proceeded to bulldoze sixteen other candidates with a brutally unfiltered style we’ve never seen before on a presidential campaign level. There is no playbook, no precedent for the Clintons to use as a guide here. And with Hillary still being the poor candidate even most (honest) Democrats will privately concede she is, Trump’s toughest opponent in the general may end up being himself.

Fox’s Bret Baier and Megyn Kelly dropped the P-word (presidential) in describing Trump’s victory speech from Florida last night, and his changed manner was apparent to any objective witness to it. So moving forward, that’s the biggest thing to watch for with Trump: Can he discipline himself in the same fashion he did Tuesday night to help put aside all of those warranted doubts about his temperament, his maturity? And if he does control his reactionary impulses in an effort to be a more palatable general election candidate, can he bring in enough new voters and/or Blue Dog Democrats to actually steal this thing? The Thursday night GOP Debate on Fox News will be a telling indicator on whether Trump has the necessary discipline — particularly with the aforementioned Kelly involved — to be a candidate Republicans will either rally around or repudiate.

If reality TV political theater is your new addiction, you’ve now got your fix coming for exactly the next 250 days.

But in the end, winning and losing may ultimately come down to a case of Trump… vs. Trump.