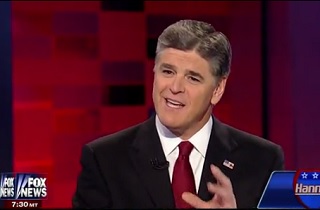 On Thursday night’s Hannity show, Fox News’ Sean Hannity put NAACP Washington Bureau Director Hilary Shelton on the spot by asking him to name one black person who has been murdered in Chicago since the George Zimmerman trial began. As a card-carrying liberal, I immediately assumed Hannity was sickeningly exploiting tragedy in Chicago to win an argument, rather than expressing heartfelt concern for black murder victims in the Windy City. Greedily, I searched Hannity’s archives to verify he had never covered such a crime on his show, and it turned out I was wrong.

Since the controversy surrounding the killing of unarmed 17 year-old Trayvon Martin began, conservatives have been bringing up so-called “black-on-black” crime, particularly in Chicago, as some sort of rebuttal. The talking point accomplishes the dual goals of framing the Trayvon Martin killing as a distraction, and of reinforcing the violent image of black people that directly led to Trayvon’s death. As many have pointed out, white people victimize other white people at nearly the same rate as “black-on-black” murders, yet no one ever talks about the scourge of “white-on-white” crime. It’s a way to blame the victim, in this case, Trayvon Martin, for his own demonization, while suggesting that his murder be ignored in favor of further demonizing him.

Some of the conservatives who bring up “black-on-black” crime feign concern for the victims, but most don’t even bother with that, and nakedly make the case that injustices like Trayvon’s killing are the result of inherent black criminality. That false, toxic view has begun to take root in legitimate media, who now see it as just another part of “the conversation.”

Upon seeing the Hannity clip posted on our website, I immediately assumed that Hannity was among the sick, cynical lot who care nothing about black murder victims, beyond their usefulness at demonizing themselves. When he asked Hilary Shelton to name one black person who has been murdered in Chicago since the George Zimmerman trial began, it would have been interesting to see if Hannity could have named one such victim had Mr. Shelton thrown the question back at him, but even Hannity is probably smart enough to have a list loaded in the teleprompter.

However, I smugly noted that in the time frame Hannity delineated, his show mentioned the murders in Chicago seven times, but Hannity never mentioned the name of a single victim. There was one occasion when a guest brought up Darryl Green, a Chicago 16 year-old who was beaten to death, but that was in response to Hannity posing a similar question to the one he asked Shelton, a line of questioning that came up on his show repeatedly during the Zimmerman trial. You’d think that if Hannity were that concerned about the media knowing the names of murdered black kids, he could say a few of them himself.

Looking back a little bit further, though, it turns out I misjudged Sean Hannity. He actually did cover a specific Chicago murder victim, and he did it on the one-year anniversary of Trayvon Martin’s death. On the February 26 edition of Hannity, he ran a package on the murder of 15 year-old Hadiya Pendleton, who was shot and killed the week after she performed at President Obama‘s inauguration. The video package included an interview with First Lady Michelle Obama, who attended Hadiya’s funeral, and told ABC News that Hadiya “was standing out in a park with her friends in a neighborhood blocks away from where my kids grew up, where our house is, and she was caught in the line of fire.”

“I just don’t want to keep disappointing our kids in this country,” Mrs. Obama added. “I want them to know that we put them first.”

Let’s see what Hannity had to say about the gut-wrenching loss of Hadiya Pendleton:

Technically, he didn’t say Hadiya’s name, but we can surely give him the benefit of the doubt that he knows it, and his heart was in the right place: attacking Michelle Obama. For the record, the National Rifle Association recognizes the legitimacy of Mrs. Obama’s use of the term “automatic,” and says, of the consternation displayed by Hannity and Dana Perino, that “its use confuses only the novice.”

While we’re on the subject of facts, the media has not ignored the murder rate in Chicago, they have covered it extensively, and organizations like the NAACP actually do work tirelessly to reduce gun violence. It might surprise conservatives to know that there is room in the human heart for more than one black person. The reason the killing of Trayvon Martin demands such attention is not, as Bill O’Reilly suggests, that so many black children are being hunted down and killed by white people (although I would submit that one is too many), it’s that the Zimmerman verdict, and the “conversation” surrounding it, suggest that doing so is reasonable, and even commendable.