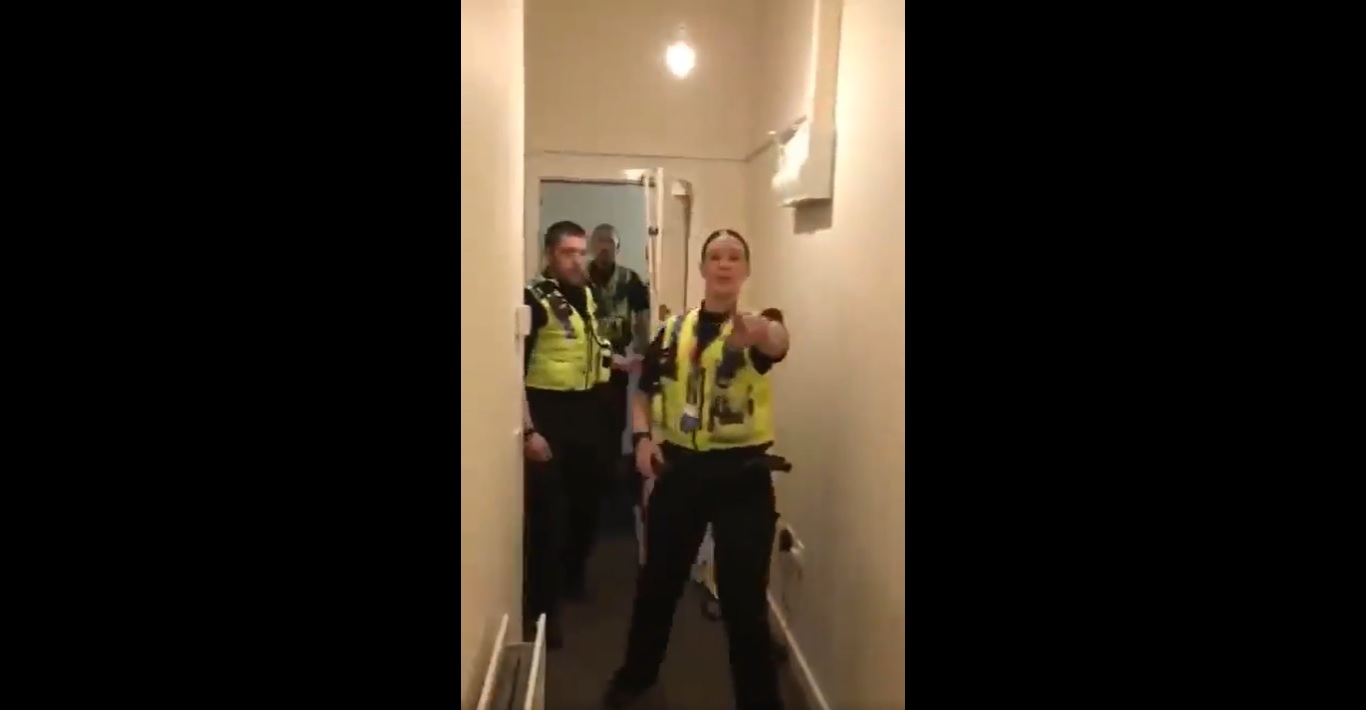 A British man lost his patience with a team of police officers after they allegedly broke down his door on suspicion of him hosting a gathering during coronavirus orders to self-isolate.

In the recording, which went viral online, the officers appear to forcibly enter his house after he refuses to open the door over coronavirus fears.

Police smash residents door in to see if there was Party. It seems they are abusing powers and degrading the public. pic.twitter.com/c8Hf5c1vhY

“Listen to us. We’ve had a call — because we wouldn’t have come otherwise — there might be something going on here. So we need to double check,” announced a female police officer as she entered his home. “I appreciate you saying about social distancing so I’m keeping the distance…”

“We need to check the rooms to make sure nothing’s going on,” she replied.

As the officer approached the man, he yelled, “Stay away from me!” before repeatedly asking why they were in his house.

“I just explained to you why I’m here. We’ve had a call that there’s a disturbance,” she explained.

“What, so you kick my door in?” the man asked, prompting the officer to respond, “Should you have opened the door, we’d have explained that to you.”

The exchange heated up as the man said, “No, I told you why I wouldn’t open the door is because of what is going around. This virus. Now fuck off and get out of here.”

“We’re just looking…” added a male officer, prompting the resident to shout, “Have a look dickhead.”

As the officer looked around an empty house, the resident commented, “Nothing going on here is there?” before asking why they kicked his door in.

“You’re fucking pathetic! Get out of here! You’re an absolute disgrace, haven’t you got nothing else to do? You put my fucking door through,” the man continued to shout. “Get out. Fucking pig. What, 20 grand a year to be a fucking nobhead? Fuck off. Get out of my fucking house. Get the fuck out… Bye! Bye!”

Police in the United Kingdom have faced repeated criticism during the coronavirus crisis for their heavy-handed approach.

“If you think that by going for a picnic in a rural location no one will find you, don’t be surprised if an officer appears from the shadows! We are covering the whole county,” the department warned, attaching a picture of two officers’ shadows.

If you think that by going for a picnic in a rural location no one will find you, don’t be surprised if an officer appears from the shadows! We are covering the whole county #urbanandrural #StayHomeSaveLifes #ProtectTheNHS 2813 7702 pic.twitter.com/hieQ86dM9R

In March, Derbyshire Police made headlines twice for their own heavy-handed stunts, which included dying a picturesque “blue lagoon” black in an effort to deter visitors, and using drones to publicly shame people taking walks in the Peak District.