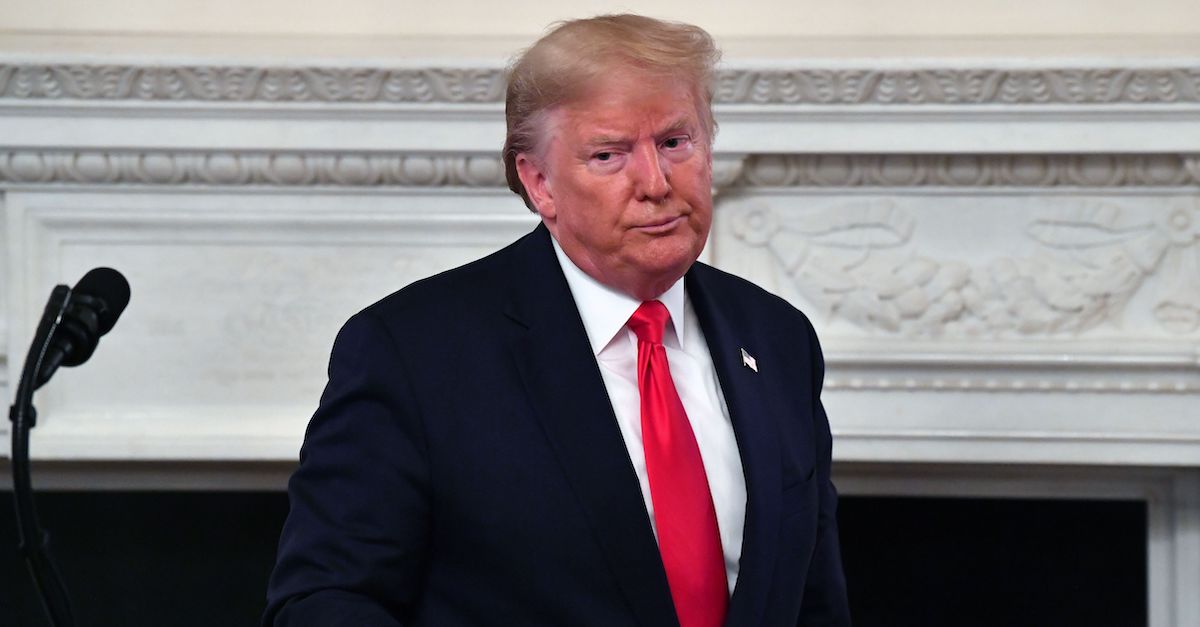 Thursday afternoon, President Donald Trump followed up on his morning tweet suggesting the November election could be delayed — comments that drew immediate condemnation from both sides of the aisle — with another tweet seemingly dismissing the entire thing as a big 0l’ prank on the media.

Trump’s original tweet came as part of a thread complaining about the so-called risks of mail-in ballots — risks which he has highly exaggerated — and ended with a question about delaying the election “until people can properly, securely and safely vote???”

After several hours of criticism and reporters seeking comment from the White House, Trump tweeted that his real purpose was to “get the very dishonest LameStream Media to finally start talking about the RISKS to our Democracy from dangerous Universal Mail-In-Voting (not Absentee Voting, which I totally support!).”

Glad I was able to get the very dishonest LameStream Media to finally start talking about the RISKS to our Democracy from dangerous Universal Mail-In-Voting (not Absentee Voting, which I totally support!).

At least two other GOP senators, Sen. John Cornyn (R-TX) and Sen. Kevin Cramer (R-ND), had also characterized Trump’s comments as a joke or distraction for the media when talking to reporters earlier in the day.

GOP Sen Cornyn tells reporters Trump’s election-delay tweet was a joke “so all you guys in the press, your heads will explode and you’ll write about it”

GOP Sen. Kevin Cramer told me he thinks Trump’s tweet is meant as a distraction: “I think that if you guys take the bait he’ll be the happiest guy in town. I read it. I laughed I thought my gosh this is going to consume a lot of people, except real people. And it was clever.”

The media spent the day chasing down Republican elected officials to get their comments about delaying the election, citing people with actual law degrees who pointed to the very plain language in federal law that has set Election Days since 1845 and in the Constitution that sets the date for presidents and Congressional members to be sworn into office, and chatting with a seemingly endless parade of talking heads who all but universally agreed that Trump had no power to unilaterally change the election date. And at least one Fox News commentator was not enamored of Trump’s idea of an Election Day delay.

In a shocking turn, even Steven Calabresi, the co-founder of the Federalist Society who voted for Trump in 2016 and has defended the president against the Mueller probe and the impeachment proceedings, was “frankly appalled” by Trump’s tweet. Calabresi condemned Trump’s comments as “fascistic” and severe enough to be “itself grounds for the president’s immediate impeachment again by the House of Representatives and his removal from office by the Senate.”

If, if “mail-in ballots” were mentioned by the media in today’s coverage at all, Trump’s claims of “risks” and “fraud” were debunked as lacking evidence, with many pointing out the fact that most states, like Trump’s residential state of Florida, do not require any proof or reason to request an absentee ballot, providing one to every voter who requests one.

The election is scheduled for November 3. The federal government has a website with links to every single state’s elections office, where eligible voters can check the status of their registration, make any needed updates, and request an absentee ballot in accordance with state laws.