Trump Fires Back at Karl Rove Over WSJ Op-Ed 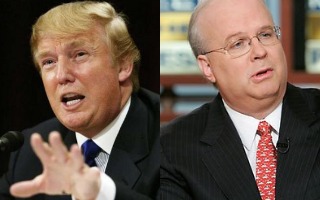 Former President Donald Trump lashed out at former Bush campaign adviser and Fox News contributor Karl Rove, bashing him as a political loser and calling on the network to cut him and his “ridiculous ‘whiteboard'” loose.

On Thursday night, the former president  issued a press release that attacked Rove as someone who “has been losing for years, except for himself. He’s a RINO of the highest order.”

During the statement, Trump revealed that he had allowed Rove to personally lobby him in the Oval Office about 5G for an unnamed group, an entreaty that the former president said he shot down. Trump also noted that Rove had called him at 10:30pm on Election Night to congratulate him, before many states had even begun to count their ballots. Trump then repeated the “rigged election” lie.

INBOX: A statement from the former president of the United States about Karl Rove: pic.twitter.com/9D7pG0JLj7

“Karl Rove’s voice on Fox is always negative for those who know how to win,” Trump continued. “He certainly hasn’t helped Fox in the ratings department, has he?”

Trump’s screed was apparently prompted by several of Rove’s recent Wall Street Journal op-eds. Last month, the former Bush campaign strategist dismissed the former president’s “smears” as ineffective against Senate Minority Leader Mitch McConnell. Then on Wednesday, Rove poured cold water on the response to Trump’s speech at last weekend’s CPAC in another Journal piece, in which he noted that only 55% of the event’s attendees wanted him to be the 2024 nominee in a straw poll.

Ignoring that inconvenient fact, Trump bragged about how many people watched his CPAC speech online and the TV ratings for it.

“Karl Rove is all talk and no action!” Trump concluded. “Next time Karl, save your Election night phone call and keep doing a great job for Democrats. Fox should get rid of Karl Rove and his ridiculous ‘whiteboard’ as soon as possible!”