Trump Tweets Four-Year-Old Photo Like It’s Current, Gets Called Out by Original Photographer 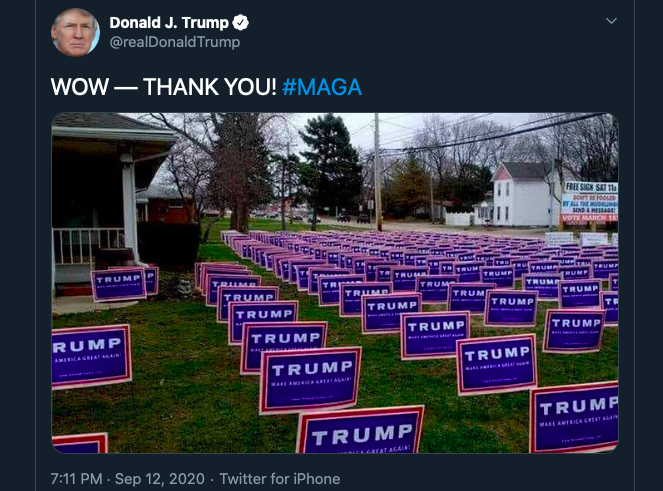 As he prepared for a campaign rally in Nevada, President Donald Trump tweeted several photos showing homes and vehicles decorated with his name and logo by his supporters — but one photo was from 2016, and the original photographer quickly called him out for the apparent deception.

ProPublica’s Alec MacGillis tweeted an hour later that the photo was “from four years ago” — a date he knew because he was the original photographer. “Where’s my credit??” he tweeted.

MacGillis soon followed up with a tweet he had posted with the photo in March 2016, and then a link to the ProPublica article where the photo was published with his byline.

And here’s the November 2016 article the photo was first published with: https://t.co/poVk32waVq

In March, I was driving along a road that led from Dayton, Ohio, into its formerly middle-class, now decidedly working-class southwestern suburbs, when I came upon an arresting sight. I was looking for a professional sign-maker who had turned his West Carrollton ranch house into a distribution point for Trump yard signs, in high demand just days prior to the Ohio Republican primary. Instead of piling the signs in the driveway, he had arrayed them in his yard along the road. There they were, dozens and dozens of them, lined up in rows like the uniform gravestones in a military cemetery.

MacGillis goes on to describe a conversation with a woman who was helping distribute the signs who was 43 years old but voted for the first time in her life for Trump in 2016, making her one of many unlikely and infrequent voters that are viewed as critically important to Trump’s electoral victory that year.

Mediaite reached out to MacGillis for comment but did not receive a reply.

Have a tip we should know? [email protected]mediaite.com