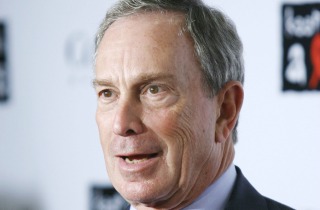 Former New York Mayor Michael Bloomberg announced today that he will not be seeking a third-party run for the presidency because he does not want to be responsible for helping elect Ted Cruz or Donald Trump.

There’s been lots of talk about Bloomberg prepping for a third-party run if the Democrats nominated Bernie Sanders and the Republicans nominated either Cruz or Trump. But with Hillary Clinton looking more and more inevitable, Bloomberg apparently feels he doesn’t have to step in as the savior anymore.

He writes, “The current presidential candidates are offering scapegoats instead of solutions, and they are promising results that they can’t possibly deliver.”

But as he keeps going on, it’s clear he’s talking more about the Republicans than the Democrats:

As the race stands now, with Republicans in charge of both Houses, there is a good chance that my candidacy could lead to the election of Donald Trump or Senator Ted Cruz. That is not a risk I can take in good conscience.

I have known Mr. Trump casually for many years, and we have always been on friendly terms. I even agreed to appear on “The Apprentice” — twice. But he has run the most divisive and demagogic presidential campaign I can remember, preying on people’s prejudices and fears. Abraham Lincoln, the father of the Republican Party, appealed to our “better angels.” Trump appeals to our worst impulses.

Bloomberg is apparently worried about actually splitting the vote and handing the presidency to one of them, saying, “I love our country too much to play a role in electing a candidate who would weaken our unity and darken our future.”

You can read his full announcement here.