Don Cheadle Slams Donald Trump in Twitter Rant: ‘You Are Truly a POS’

Don Cheadle Slams Donald Trump in Twitter Rant: ‘You Are Truly a POS’ 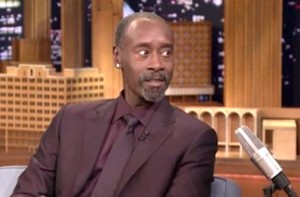 Don Cheadle did not mince words in his Twitter attack on Donald Trump Saturday and Sunday. In case you missed it, the GOP candidate for President Tweeted his condolences to Dwayne Wade, whose cousin was shot and killed in Chicago while she was on a walk with her baby. People weren’t thrilled with the Tweet, to say the least. It read: “Dwyane Wade’s cousin was just shot and killed walking her baby in Chicago. Just what I have been saying. African-Americans will VOTE TRUMP!”

His Twitter account then released a second, decidedly less offensive Tweet which said “My condolences to Dwyane Wade and his family, on the loss of Nykea Aldridge. They are in my thoughts and prayers.” Presumably, this was ghost-written.

You are truly a POS https://t.co/cyTwxgxwDh

The actor took a lot of heat for his Tweets, so explained that it was “hyperbole.”

Then, he started responding to some of his haters individually:

Oh, honey. You know so little about how all this works. But that’s ok. It’s inside baseball. Be well. Bye. https://t.co/W9cepUA72N

35million?!???? If I had 35 million I’d never work again!! You get that off a rando website or something?! Hilarious https://t.co/XOO7rNrOJ7

Ewww. I hate caviar. And I’m looking up “rich black guy guilt.” Hope there’s a salve for that … ? https://t.co/C6Nb4mnKpg

Danny Woodburn, for the win:

Can this be a thing?

“I’m about to go @DonCheadle on his ass”

You know, when smart and informed points out ignorance and hate.