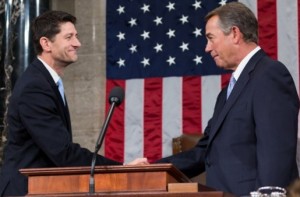 Boehner said during a conference in Boca Raton, Florida that “anybody can be nominated” at the convention. “If we don’t have a nominee who can win on the first ballot, I’m for none of the above,” he said.

“They all had a chance to win. None of them won. So I’m for none of the above. I’m for Paul Ryan to be our nominee,” he continued.

Boehner’s remarks were more than a little awkward, considering he’s already endorsed fellow Ohio Republican John Kasich. But Boehner’s spokesperson indicated that his boss was only endorsing Ryan in a situation where Kasich failed to secure the nomination.

Here’s Boehner spox @OhSchnitt on the report that Boehner endorsed @SpeakerRyan in a contested convention: pic.twitter.com/BxniqTA5bv

Boehner has floated Ryan as a consensus pick before in off-the-cuff remarks, but never so strongly. Ryan spokesman Brendan Buck shot the idea down earlier this month: “In addition to this being an incredibly remote scenario, the speaker has no interest in it.”

UPDATE: 1:56 P.M. EST Ryan spoke to Politico about this today, and he said that even now, the answer is no.