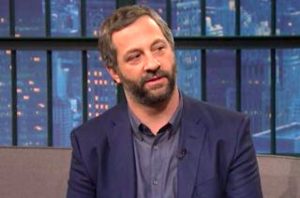 Judd Apatow has been vocally against Donald Trump for a while. If you look at his Twitter account, it’s full of tweets and retweets calling the GOP candidate out on pretty much everything. He’s incredibly concerned at the prospect of a Trump presidency to the point that it’s the only thing in his feed. In response to a fan wondering why he hasn’t been funny in a while, he said “I will be funny in December. For now I am more concerned with not electing a madman who incites violence and racism.”

The writer, director and comedian appeared on In Depth with Graham Bensinger. When asked about Trump, Apatow said, “Well, I think he’s a sociopath. I think he’s a very, very dangerous person. I think even if you believed in a lot of conservative values, you shouldn’t support him because I don’t think Donald Trump believes in those values.” Apatow believes “he’s a heat-seeker. He’s somebody looking for power. And you know, when you’re a 70-year-old man and you have not spent any time concerned about anybody but yourself and your family…you’ve done nothing for the world… I don’t think suddenly you’re that person that cares about… the country.”

He continued, “I think it’s like a crazy person. I honestly think it’s a crazy person. And even if you’re like, ‘I want my taxes to be lower,’ yeah, it’s not enough…. You can tell this is not a person that understands any issue deeply. This is the most important job in the world, and you can’t give it to an idiot… He certainly shouldn’t be in a position of power. It’s very very dangerous.”