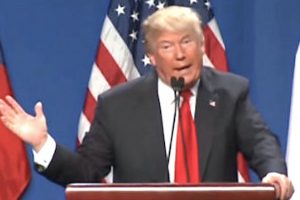 While a new poll of Donald Trump voters from GPG contains data on dozens of poll questions, one in particular on page 54 of the poll slideshow, jumps out at us. That would be the one asking about the something that Trump made a campaign issue at a March 2016 Trump campaign rally in Fort Worth, Texas: “Opening up” defamation laws. According to the new survey, 49% of Trump voters favor making it easier to sue news media. Specifically, here’s the exact phrasing that was used in the poll question and possible answers according to GPG:

As you may know, there has been discussion recently about whether or not the courts should make it easier for public figures to sue and to win lawsuits against the news media for unfavorable or false coverage. Which of the following statements comes closest to your own view on the issue?

The question does seem slightly skewed in the sense that it mentions “unfavorable or false coverage” as opposed to just “false coverage,” which could influence the responses a bit, but it’s still an interesting figure even answering that specific question. What makes it especially interesting is that the poll was conducted after Trump had already disavowed that promise last month in his post-election interview with the New York Times:

SULZBERGER: So, I, with apologies, I’m going to go to our C.E.O., Mark Thompson, for the last, last question.

MARK THOMPSON: Thank you, and it’s a really short one, but after all the talk about libel and libel laws, are you committed to the First Amendment to the Constitution?