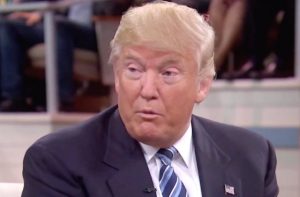 Donald Trump appears to be just a bit under the weather this evening, as he has been sniffling through much of the first third of the debate. And Twitter is noticing.

Here’s a sampling of the reaction from the Twitterverse:

Who wants a loop of Donald Trump sniffling? https://t.co/F9g1NPN573

Trump is sniffling because he's allergic to the Constitution

This sniffling is Nixon’s sweating in 1960

A lot of people, a lot of very smart people, are saying that frequent use of cocaine can lead to irritation of the nasal septum, sniffling.

Donald Trump has been sniffling throughout debate so far.

Sniffling is the new sighing. #debatenight

I grew up in Florida in the 80s. I've seen these signs.

Will 'sniffling' be like Ben Carson's coughing/Al Gore's sighing… ? #DebateNight

Trump keeps sniffling. Is he… SICK?! Or is he sad about something?

His sniffling is a distraction. Does he need a doctor? #debatenight

Trump is sniffling. HE IS ILL

DONALD KEEPS SNIFFLING; DOES HE HAVE A TERMINAL DISEASE; IS THIS A SNIFFLING BODY DOUBLE; WHERE IS THE SYRINGE