Trump Campaign Sends Out Text to Get People to Tulsa Rally 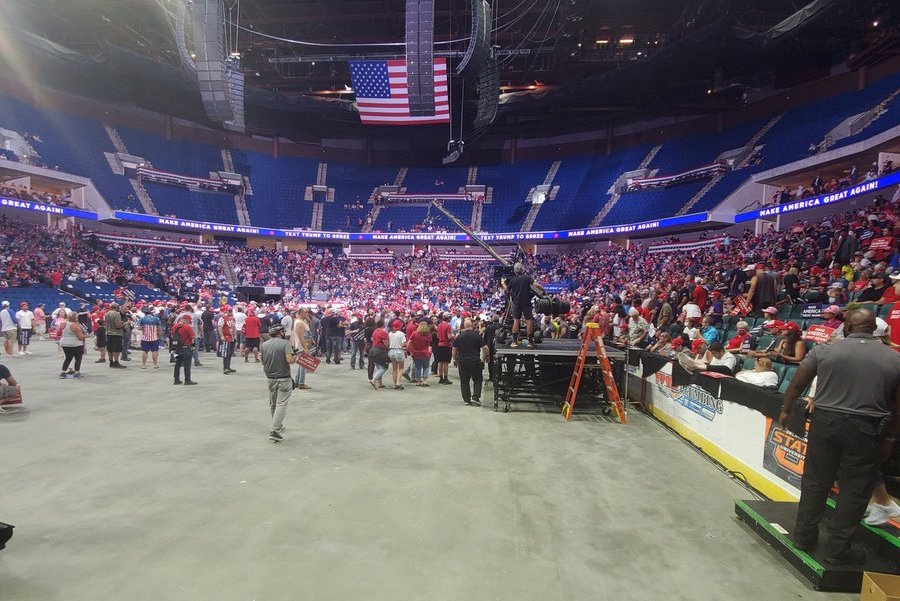 President Donald Trump was hoping Saturday’s rally in Tulsa, Oklahoma would kickoff his 2020 reelection campaign in a big and energizing way. So far, the event is shaping up to be a disappointment for the president who thrives on crowd sizes and television ratings, with attendance falling well short of expectations.

The campaign had touted a million RSVPs for the rally, but an outdoor “overflow crowd” event was cancelled because not enough people showed up. Not only were there not enough people to constitute an “overflow” crowd, the event remained below capacity inside the arena as well.

Trump campaign manager Brad Parscale had tweeted a photo of the outdoor stage being constructed Friday night. Now, it appears it will go unused.

The outdoor stage for @realDonaldTrump’s Rally in Tulsa being built.

This will be the 1st time that POTUS speaks to BOTH crowds in person – inside & outside.

If you come to the rally and don’t get into the BOK Center before it’s full, you can still see the President in person! pic.twitter.com/7hoLFgzvLA

As the 8:00 pm ET start time approached and reporters’ photos of the event venue — showing many empty seats, including almost all of the upper bowl — started circulating on social media, the campaign sent out a text message to those who had signed up online for the rally.

According to multiple reporters on the ground in Tulsa, the text message read:

People who signed up for Tulsa Rally are getting texts from the campaign right now: “The Great American Comeback Celebration’s almost here! Doors are OPEN at the BOK Center. Pres. Trump can’t wait.”

As CNN noted, the campaign was blaming the low attendance on protesters blocking access, but their reporters on the ground did not observe any protesters around the security checkpoints and entrances, in fact, only a few people around the area, period.

CNN reporter Abby Phillip described the scene as “only a smattering of people out here…there’s nothing happening out here, it’s virtually empty.”

Trump’s speech begins at 8:00 pm ET, and you can watch a live stream here.