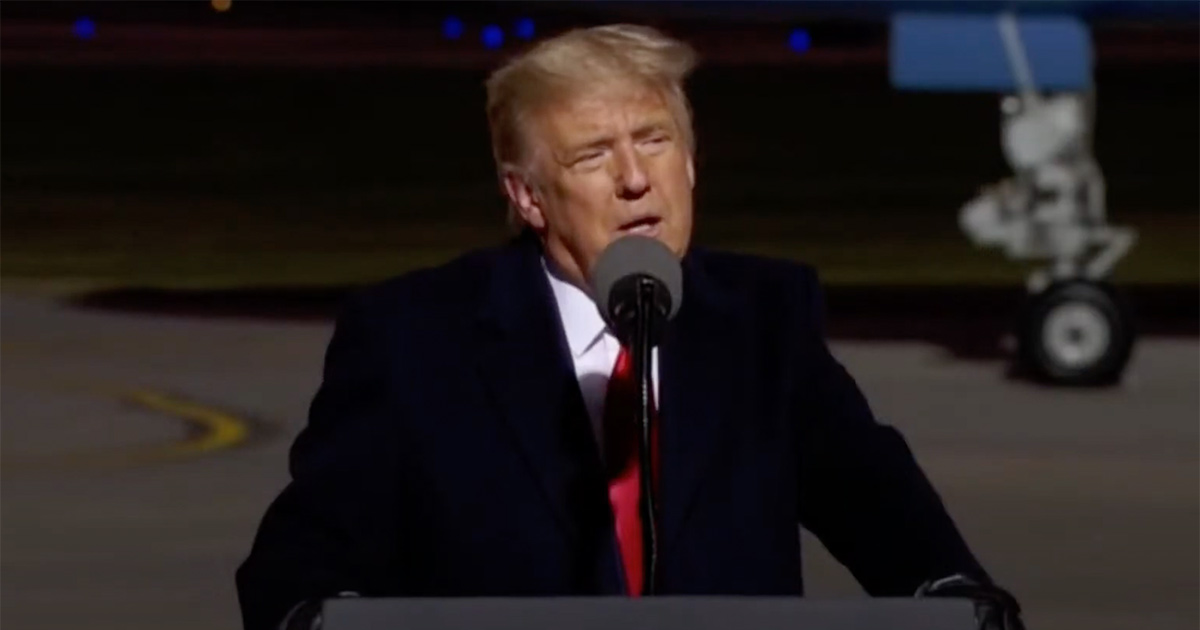 President Donald Trump has been doing a lot of rallies in the final leg of the campaign, in a number of key states, and generally going for at least an hour at most of his campaign stops. The Trump campaign has contrasted those big rallies with the events Joe Biden has held.

Those Trump rallies have not followed social-distancing guidelines, but the rally he held in Minnesota Friday night was smaller than usual because of state limits on gatherings. The president publicly blasted those state officials for limiting the crowd at his rally to only 250 people.

Keith Ellison Restricts Freedom of Assembly of Political Opponents https://t.co/WAPPsfQrWk via @BreitbartNews We were planning for as many as 25,000 people in Minnesota. Now the Governor, at the last moment, will only allow the first 250 people to attend. Riots plus Omar = WIN!

There was an overflow crowd at the venue, which the president briefly addressed prior to the rally, but the rally was obviously smaller than the normal Trump rally and there were social distancing measures in place.

Trump’s speech lasted only 21 minutes, which stuck out to a number of reporters covering it:

Trump appears very tired at this rally in MN, slowly moving through his prepared remarks.

The president is either tired or dispirited by the limited crowd. He spoke for only 20 minutes. No dancing to YMCA as he departs.

The president was subdued and moving fast through his speech tonight in MN. The difference between the two earlier ones? The crowd was restricted by state officials over covid concerns. No big crowd, less interest in the speech.

Trump just spoke for less than 30 minutes to a crowd in Rochester, MN, after lamenting at several points today that local authorities would only allow 250 people into the rally of the thousands he said wanted to attend.

Not even a half hour ! I’ve never seen Trump look less interested https://t.co/G21ImftINL

Trump's Minnesota rally was just 21 minutes long, which has to be the shortest of the campaign for him by far.

(The crowd was smaller because of a Covid-related order from the governor. Trump criticized the order and the governor. He normally feeds off crowds.)

Trump is already done in Minnesota

Trump in Rochester read almost exclusively off the teleprompter, in a flat voice, with little ad-lib, then ended his 3rd event of the day after just 20 minutes. https://t.co/3sh9XSj7Ly

Maybe it’s the small crowd. Maybe it’s the cold. But this is the lowest energy I’ve ever seen the President be at a rally. He’s blowing through his applause lines, just checking the boxes on his usual speech, like he’s got somewhere to be. pic.twitter.com/iZyj6YSlLp

Trump spoke for less than 30 minutes. I can’t ever recall a rally that short. He spoke for 1 hour 15 min in MI earlier today. This was his third stop. https://t.co/HEtu41SFMp