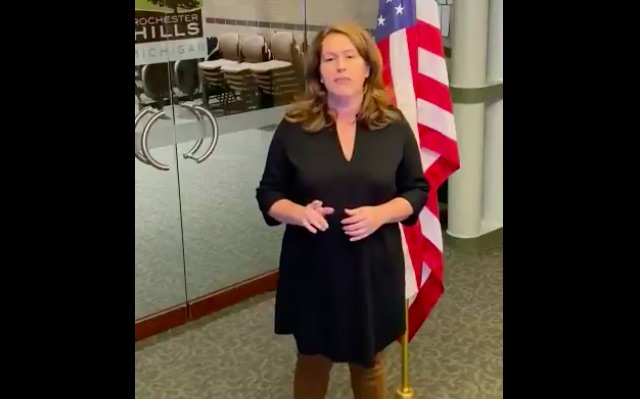 A Republican county clerk in Michigan, Tina Barton, posted a video to Twitter that directly debunked a “categorically false” claim about mishandled ballots made by the national chairwoman of her now party.

On Friday, Barton, the lead election official in Oakland County, a suburb of Detroit, called out an exaggeration by Ronna McDaniel about 2,000 mishandled Republican ballots in her county. Many top GOP officials have been making unsubstantiated or bizarre claims about election misconduct in support of President Donald Trump’s misinformation campaign to cast broad doubt on an election that he increasingly looks to have lost.

Barton, no matter her party affiliation, was not buying into that effort.

“All ballot are and have been accounted for,” Barton calmly insisted. “There were no missing ballots. The accusation that 2,000 ballots were ‘found’ is categorically false. As a Republican, I am disturbed that this is intentionally being mischaracterized to undermine the election process.”

“This was an isolated mistake that was quickly rectified, once realized,” she added. “Every voter should have complete confidence in our voting system. Every vote that was cast was counted accurately and there’s a paper ballot back-up. I stand by our reported results.”

As the City Clerk of the City of Rochester Hills, this is my response to the inaccurate statement of @GOPChairwoman. https://t.co/TdxyIvEZ2J pic.twitter.com/t5C1VvGR01

Barton’s unprompted declaration was sparked by McDaniel’s comments to the press on Thursday, where she raised the specter of 2,000 “found” ballots in Barton’s county in imply that thousands — or millions — more votes could be jeopardized or uncounted across the country.

RNC Chair Ronna McDaniel: “Just last night in Oakland County, we found 2,000 ballots that had been given to Democrats, that were Republican ballots, due to a clerical error. And this took place in Rochester Hills.” 1/2

In fact, despite near-record turnout and the complication of holding a nationwide vote amidst a pandemic, the 2020 election has been marked by almost no issues of potential fraud or irregularity.