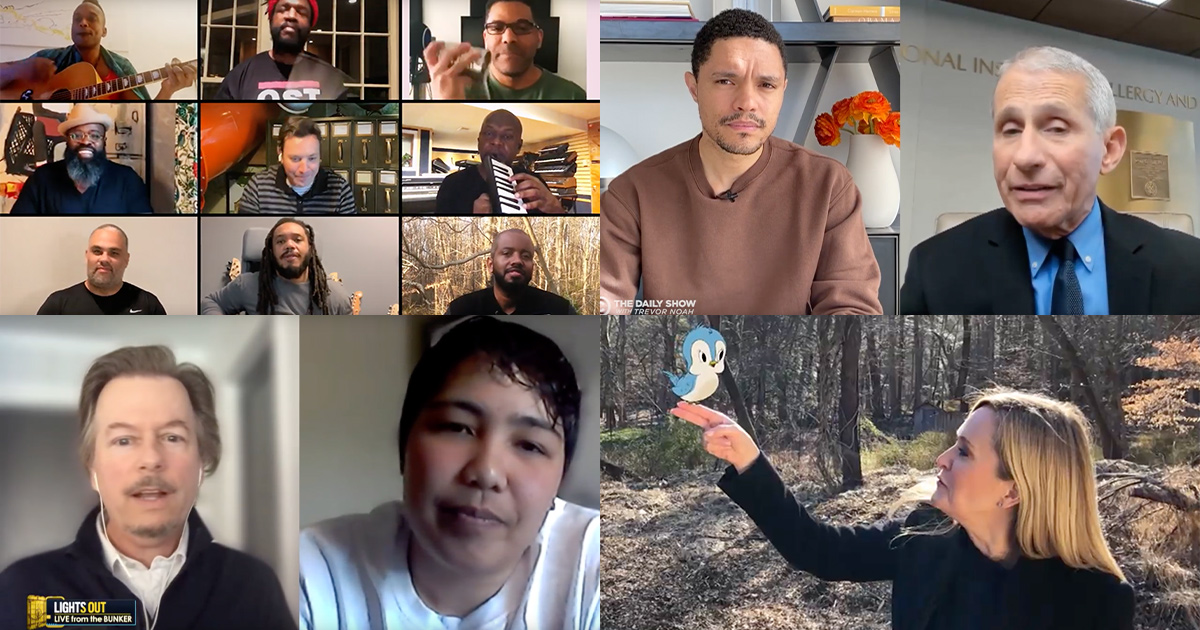 This is week two of all of late night being off the air during the coronavirus pandemic. But hosts have continued doing shows from home and brought in plenty of special guests to entertain viewers. We’ve put together some of this week’s highlights below:

Jimmy Fallon returned with more at-home Tonight Show episodes this week, some some pretty big guests, but there’s just nothing like a good old-fashion jam session. And Fallon and The Roots got together do just that, performing the classic “Stuck in the Middle With You.” In the same episode, Fallon also chatted with Tina Fey and chef José Andrés.

The 2020 election right now has largely taken a backseat to the coronavirus pandemic and the international ramifications. But this week Jimmy Kimmel brought on Joe Biden to ask him about his own quarantine, President Donald Trump’s personal response to the crisis, and whether there’s a chance POTUS could postpone the election.

Seth Meyers has been off, but he returned from home this week with new installments of “A Closer Look” ripping the president’s coronavirus response. In Thursday’s installment, Meyers reminded viewers of Trump’s impeachment and how he sees everything as transactional — to contextualize the way the president has been trashing governors who have been publicly critical of the federal government response to coronavirus.

Dr. Anthony Fauci has been all over the media informing people about the spread of the coronavirus, and this week me made his late night debut with Trevor Noah. Noah reviewed a lot of the basics of what people need to know, especially young people. Fauci also emphasized that “the virus is the clock” and that setting arbitrary goals to reopen the country is not advisable.

Samantha Bee continued hosting from somewhere in the woods this week, highlighting how the working class and small business owners are struggling and how dumb spring breakers have been acting. She also called out companies not doing enough to support workers during this time. What stage of of cabin fever is “hallucinating cartoon birds” again?

Everyone’s new favorite Netflix obsession is Tiger King: Murder, Mayhem and Madness, a wild docuseries about the life of Joe Exotic. If you know who Joe Exotic is, you are in for a treat. If not, even more so. Anyway, this week, David Spade (who has continued doing “lo-fi” versions of his show) interviewed fan favorite Kelci Saffery, whose arm was amputated after a nasty tiger attack. Saff chatted with Spade about that crazy ordeal and who could potentially play Joe Exocit in the movie.