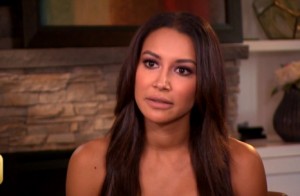 Naya Rivera is opening up about the moment she learned her ex boyfriend and former Glee co-star Mark Salling‘s arrest for child pornography.

“My son’s nanny actually told me about it when the story broke,” she says in her memoir Sorry Not Sorry. “Then I had no doubt that God really did have my back along the way.”

Salling was arrested last December after police obtained a warrant to search his California home. In May, he was indicted on charges of receiving and possessing child pornography, which they allegedly found on his computer and flash drive.

He and Rivera dated for three years while they were filming Glee, until she says his publicist told him she wasn’t good for his image. She writes, “When Mark dumped me, I thought it was the worst thing ever. But can you imagine if that didn’t happen? And I was laying there in bed when the battering ram came through the door?”

Rivera also says she wasn’t surprised to found out he had been charged. “I can’t say I was totally shocked, but still – WTF?”

Sorry Not Sorry is out now.