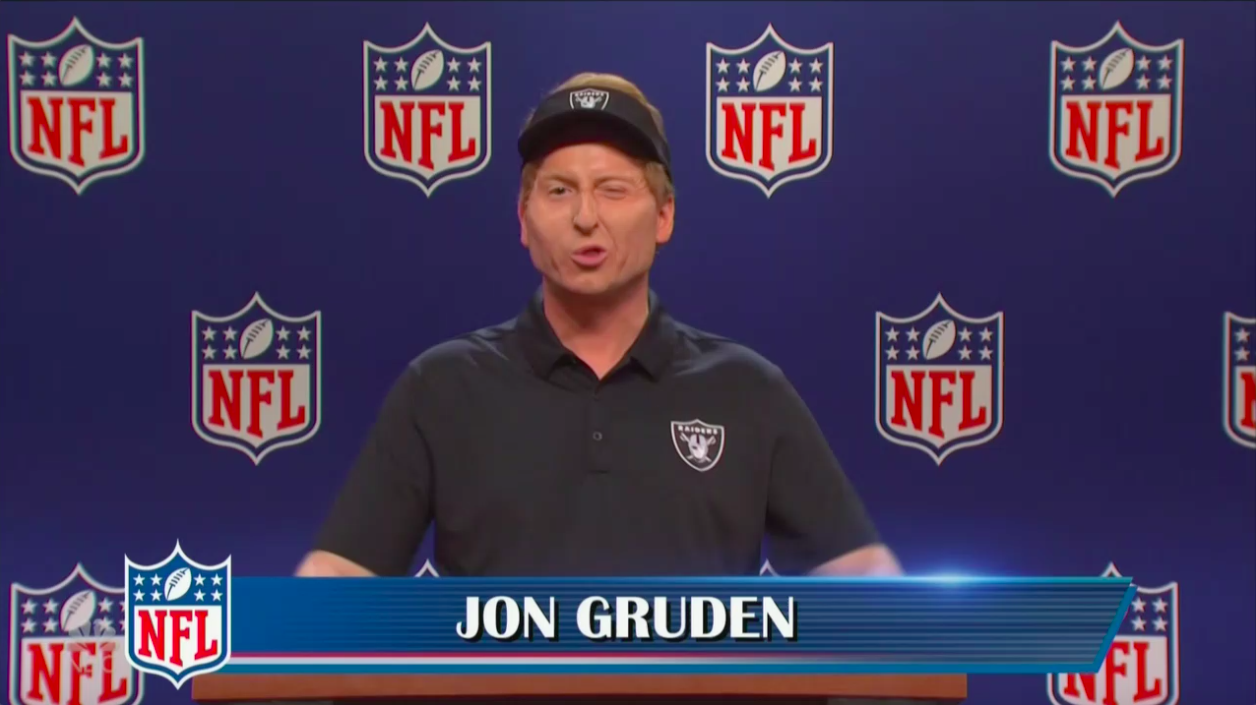 Saturday Night Live‘s cold open this week mocked the NFL and Jon Gruden, the head coach for the Las Vegas Raiders who stepped down hours after the New York Times detailed homophobic and misogynistic emails.

The revelation followed a report that Gruden had also used a racial trope in a decades-old email.

The sketch started by Colin Jost parodying Roger Goodell, the commissioner of the NFL.

“When you see me on TV, it’s never good. this time, one of our coaches is accused of racism, misogyny, and homophobia but hey — at least no one’s talking about concussions,” Goodell said. “I think we can all agree the emails sent by raiders coach Jon Gruden were horrifying and deeply offensive, especially to me. I was referred to as the F-word, the P-word, the C-word, the R-word, the F’ing R-word, and the F’ing R-word P-word. Once, weirdly, I was called a DILF, that was kind of sweet.”

Saturday Night Live mocked the NFL and Jon Gruden, the head coach for the Las Vegas Raiders who stepped down after homophobic and misogynistic emails were discovered. pic.twitter.com/k1A6AUo1Cj

“But I assure you all 32 teams in our league understand that diversity is our strength, and I know our black coaches would agree — both of them,” he continued. “Now Coach Gruden has asked to say a few words. I said, bad idea but he got on his knees and begged and you know how much I hate seeing someone kneel.”

Gruden, played by James Austin Johnson, then came on to say, “I’m sorry to all the Raiders fans out there hope you won’t judge me on one email I sent 10 years ago, or the 20 emails I sent last Tuesday.”

The rest of the sketch riffed off of the NFL having frequent turnover as past comments and posts are unearthed.

“I was the equipment manager five minutes ago. Then someone just pushed me on stage and whispered, ‘you the coach now!'” said the third coach in the sketch. “So let me say this: Las Vegas will not tolerate misogyny of any kind — never has, never will. I will vouch for the entire city on that. Also, I’m resigning immediately. I see reporters digging through my old tweets, and that will not end well for me. I never should have dressed up as Jackie Chan for Halloween, but 2019 was a different era.”

The next head coach coach in the line-up was actor LeVar Burton.

“Suck on that, Mayim Bialik,” he joked, referencing the Jeopardy! hosting gig she was granted over him. “I am the supreme football host now. I will take offense for 300.”