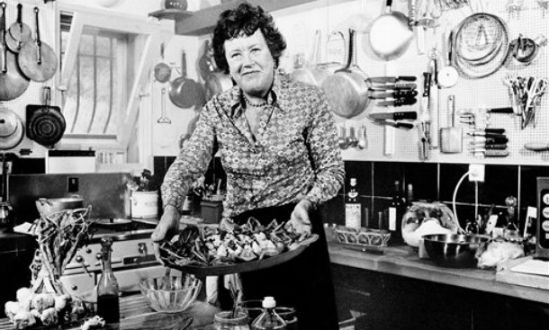 It’s a snowy day, depending on where you are, and what better way to spend it than by reading about roast goose, reverse martinis, and the catty infighting that plagued the world’s most prominent chefs and food writers in the 1970’s?

[Olney’s] presence had set off sparks. Olney’s French Menu Cookbook, published that fall, pioneered an ingredient-driven, purist approach to French food. (It was the first cookbook to be organized by season.) He thought of himself as a far better cook than Child, and was disdainful of her amateur, TV-cooking-show audience. Olney did not have a television.

…As they stuffed the geese, Child and Jones discussed the goings on of the previous week. How was Beard’s health? Had he lost any weight at the diet clinic? (He hadn’t.) Was Olney really as brilliant a cook as his superior persona seemed to imply? (Maybe.) Why had M.F.K. Fisher gone off on her own? (The solitary life of the writer, apparently.) Jones would be meeting her in a few days in Marseilles. Child talked about her fraying partnership with Beck, who resented Child’s growing TV celebrity and considered herself to be the authority on all things French. Child, meanwhile, was growing impatient with classic French cooking and looking forward to exploring new things: a New England clam chowder, an Indian curry.

We’re taking bets on how long it will be until this era in food cooking will be turned into a prestigious cable television period drama.