According To Mayor Antonio Villaraigosa, Jet Tila Is The Coolest Asian In Los Angeles 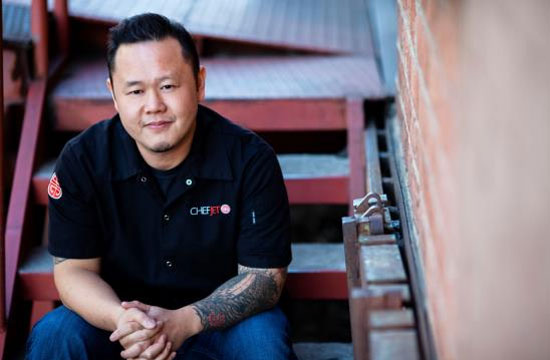 “Cool Asians” isn’t just the name of a clique from Mean Girls, it’s also the designation that Los Angeles-based chef Jet Tila will soon receive from the mayor, Antonio Villaraigosa. Okay, maybe that’s not a real award (and if it were, David Choe would win it forever), but the Thai/Chinese chef will receive something that’s close enough. Next month, Tila will be crowned with the prestigious “Dream of Los Angeles” Award from the City of Los Angeles, given out annually in honor of Asian and Pacific Islander Month.

Why is Jet Tila now The Best Asian In Los Angeles (and maybe the world)? Here are a few choice accomplishments (from his press release devoted to his career) that really encapsulate how Tila became a big ol’ celebrity chef brand:

§  Is tapped by Steve Wynn to open Wazuzu in Las Vegas, narrowly avoiding having to work for Sheldon Adelson or Donald Trump

§  Consulting Chef for 300 high-end cafés, including quite a few with his name on them

§  Appointed as the inaugural Culinary Ambassador of Thai Cuisine by the Royal Thai Consul-General, Los Angeles; subsequently taught Emperor Mongkut how to waltz.

§  Once took Anthony Bourdain to Thai Town, which is kind of a big deal.

§  Holds three world records: for creating the World’s Largest Stir-Fry (4,010 lbs.); Longest California Roll (440 feet); and Largest Seafood Stew (6,500 lbs.) This is a real accomplishment that he should be proud of. The Dream Award is nice resume fluff in contrast.

So yes — congratulations to you, Jet Tila!