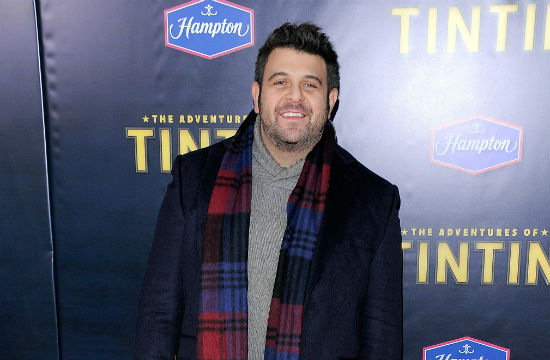 Adam Richman, host of Man vs. Food, New Orleans aficionado, Brooklyn native, Yale Grad School alum, and lover of the phrase “a sandwich is just your imagination bound by two slices of bread” stopped by The Braiser Media Lounge this weekend at the New York Wine and Food Festival 2012 to warm the cockles of our frigid hearts with his deeply patriotic views on the how Russian pierogis built the nation’s character. No, seriously, it evaporated our election season cynicism for like, ten whole minutes. Check out our Q & A below.

The Braiser: Tell us about the upcomingWorld Food Championships, which you’re hosting in Vegas.

Adam Richman: The World Food Championships was basically the brainchild of the Agency of Record, who had all the big recognized food championships — well, I don’t want to say all, because I’m sure there’s probably like a really good competition in Latvia that is not involved — but then again, it’s not really the World Series if everyone competing is from America… I digress.

That’s such a good segue into our next question! It seems like cooking competitions are a very American thing. Is there something about American cuisine that makes it especially conducive to “cook-offs” or are Americans just competitive by nature about everything?

That’s a great question. I think to some degree, a lot of it has to do with our character, like, as a people. I think Americans can have the most uncanny knack to turn anything into a competition. Like, how many Girl Scout cookies can you sell? And you have nine-year-old girls [competing against each other].

Everything is a pissing contest.

Absolutely. It’s a dick-measuring contest about everything! The biggest car, the biggest, you know, whatever — chugging contest! I mean, if there’s something that there’s a differential on… The thing that I think is interesting about cooking competitions that I always appreciate, especially with the most quotidian of things, like chili cook-offs — there’s a bitchin’ chili cook-off in every Super Bowl Sunday in Brooklyn — is that I think it elevates everybody’s game. I think it has to be healthy competition; you can’t lose sight of the fact that, at its best, it’s food. It’s delicious food, but it’s food. But I think that if you can get better because of that competition, that’s a very cool, special thing.

Tell us more about repping Brooklyn at NYCWFF 2012. You did Brooklyn’s Backyard, right?

Oh, I just may have. So, yes, I did an event — it started as Brooklyn’s Bounty last year. Brooklyn’s Bounty was held in a former brass factory in Gowanus, which is awesome, but we sort of took it to the next level this year. We actually got One Hanson Place, so it’s got this massive massive main foyer.

It’s the bank, right? I was just there for Brooklyn Pour. It was super cool.

Yes, the Williamsburg Bank. The tallest building in Brooklyn, random side note. Yeah, the vaulted ceilings and the mosaics; it’s so breathtaking in so very, very many ways. But I think that what I loved about doing Brooklyn’s Bounty, and Brooklyn’s Backyard now, is just simply that these were the places I grew up going to. These weren’t the places that sprung up because they were following a national culinary trend. These aren’t places that sprung up because there was some sort of nepotistic thing, like, “My dad was in the restaurant business, therefore I’m in the restaurant business.” It was much more about, “I’m from Russia. I make perogies. These are the perogies I sell.” And so to see hometown pride, and to see Spumoni Gardens, where I’ve been going since I was six years old, to see them getting a chance to shine on the national stage is a really, really special thing.

So what else are you doing at the Festival?

I’m a judge for Burger Bash, which starts out as you thinking, this is the coolest job on Planet Earth. And then six burgers in, it’s like this beef Bataan Death March and you’re like [makes food coma zombieface], you know what I mean? It’s delicious. The problem is — I mean, it’s a good problem to have, I suppose — but, generally speaking, it was like, there were so many burgers to try, that it’s like an embarrassment of riches. It’s awesome. It shows the universality of stuff like burgers.

Are events like this, for you, more about catching up with chefs you haven’t seen in awhile, or is it more about connecting with your fans?

For me, it’s actually seeing how my city shows up on the national stage, and how the locals interact with the visiting chefs. I think that’s a very, very overlooked part. But also, I mean, I love to be able to really be where the rubber meets the road. You make TV shows and you host TV shows kind of in a vacuum. So to suddenly see that you actually have an impact, and to also see — you know, people in the industry make so much out of how we create the trends. We actually respond to the public, and it gives us a chance to really get a gauge and a barometer on what people are eating and what people want to eat. Not imposing a concept, but really being of, and for, and by the people that we supposedly cook for.

Absolutely. Like you said, there is that element of “I Haven’t Seen My Buddy.” You know, everyone’s been off conquering the world in their own little fiefdom. Bobby [Flay]’s got his brunch show, and he’s got this, and he’s got that. I think that there’s definitely something to be said for getting the chance to see your friends and reconnecting. I was just at Andrew Zimmern’s Carts in the Parc event — and I don’t mean to be like, “Oh, Andrew Zimmern, he’s my boy.”

Not at all! He was in The Braiser Media Lounge this morning. He’s our boy, too.

So I was at Andrew’s Carts in the Parc event, and I think it was a really awesome thing. I love Burger Bash, because, again, it’s the same medium. And I’m biased. You know, Brooklyn doesn’t always get the same love that Manhattan does, in terms of its culinary notoriety, and to be able to be a catalyzing force for that is pretty badass.

If you were going into a situation in which some evil government threatened to take away your show unless you competed in a cooking contest of your choice, what would it be and how would you win? Kind of like The Hunger Games for celebrity chefs.

Rock and roll. I would do like, an Iron Chef. For sous chefs, I would have Tim Love and I would have probably Masaharu Morimoto. And then secret ingredient would have to be some kind of really dope protein, but I would definitely gravitate towards a pulled pork thing. What I would do is take Tim Love’s Texas heritage, Mas’s hardcore Japanese robatayaki style, and all the different barbecue styles that I’ve assimilated, and go kind of Wu Tang on that ass, and show like, myriad ways of dropping the hammer. And, plus, I’m a fan of The Chairman’s movie Brotherhood of the World. The ending wasn’t as good, but he was a badass in it. I would also win by kissing his ass and telling him how much I liked his movie.

Oh man, you are killing me. I would do Lee Anne Wong, because she is a party. She’s like a tempest in a teapot. Lee Anne Wong’s such a rock star that one of us might end up pregnant, and it might be me. Things gon’ get freaky with Lee Anne. She’s a good friend, but she’s gon’ turn me out like a trick.