LIST: Here’s What Happens to Your Food When the Government Shuts Down 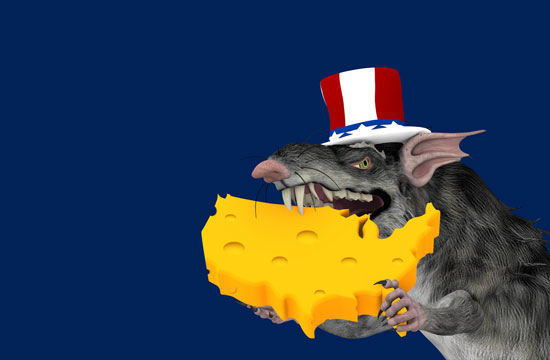 In approximately twelve-ish hours, the federal government will undergo a partial shutdown, barring a deus ex machina forcing Congress to compromise and pass a federal budget that Barack Obama would willingly sign. (At this point, that deus ex machina would be something like Alexander Hamilton descending from the heavens with a giant paddle.)

Thanks to the Constitution placing Congress in control of the federal budget, this means that the government can’t spend money on things that makes a government run — including websites that will tell you exactly what government food services will and will not be available. (True story: the United States Department of Agriculture might not even have a website in a week. EDIT: Aaaaaand it’s gone.) Did you already buy your water purification systems and six months’ worth of canned foods? No? Oh dear.

In that case, here’s a quick rundown of how the current shutdown will affect the things you put in your mouth, by the agency responsible for their safety and production.

1: I am impoverished. Can I get food stamps? Definitely through October; maybe through the end of FY 2014. Though Tom Colicchio and Sam Kass are raging against the House GOP for defunding the Supplemental Nutrition Assistance Program (SNAP) in their version of the federal budget, the food stamp program will be funded through the end of October as required by the Recovery Act. If possible, $2 billion in contingency funding could be used to fund state administration costs until the end of the 2014 fiscal year.

2: I am not poor, but I consume food on a daily basis. Will my food be inspected? Yes. Sort of. Maybe.

2a: Can you be more specific? Certain inspection services are considered so essential that they’re legally exempt from a federal government shutdown. Meat, egg, and poultry inspection will continue on a daily basis. Grain inspections will continue too, but only if the user fees paid by farmers can fund the inspection program. In short, your oatmeal might kill you with salmonella before your meat does…if the cows don’t starve before that. (Welcome to Backwards Land.)

Oh, and the Food and Drug Administration is curtailing its activities to inspections, recalls, investigations, and preventing people from buying products that could kill them.

3: My child goes to public school. Will my child get free lunch? Yes. Technically, the federal school lunch (and breakfast) program will be funded through the end of October, but after that, food suppliers will continue to supply schools, eventually getting reimbursed for whatever they send to schools to feed the children. (Good thing pink slime is so cheap?)

4: What if I’m a pregnant woman, or infant child? We assume that you’re referring to the Special Supplemental Nutrition Program for Women, Infants and Children. You’re SOL, unless you happen to live in a state that has a budget covering the administrative costs of the federal program.

5: Will people inspect the restaurants I eat in? Restaurant inspections are funded by state government budgets and will remain unaffected.

6: What happens if a Sharknado made of extremist Muslim sharks rips through America’s Heartland and destroys all the farms? Thankfully, the Federal Government will not leave our nation’s crops and herds to be devoured by Al Qaeda sharks — homeland security and disaster response programs will remain funded. (Disaster relief won’t be funded, though — so while the Feds will fight the sharks eating your crops and herds, they won’t reimburse you for your loss.)

6a: What if that Sharknado is headed towards a nuclear reactor or chemical stockpile next to a farm? First, why did you put these dangerous things next to farms; and second, we’d all be screwed, because emergency preparedness programs will no longer have funding. And now our cattle herds have turned into cow-corn hybrids, and they’re entering an alliance with the Al-Qaeda sharks. #thanksobama

7: What if there’s an outbreak of foodborne illness throughout the country? Like, what if people ate Kraft Cheese that turned them into zombies? You’re coming up with some…very imaginative scenarios.

7a: It’s a very legitimate concern. Okay. Fine. The Center for Disease Control and Prevention will furlough 68% of its workers and halt in-depth investigations to identify and link outbreaks, like your ridiculous cheese zombie scenario. This means that not only will you not know why you’re eating less cheese and more brains, you’re also less likely to receive a vaccine or a cure, since, guess what, the CDC won’t be researching those either. Thanks to “minimal” staff support, you’ll probably get a Band-Aid and a recommendation to start spreading brains on water crackers, like Brie.

RELATED:
After House Cuts SNAP Benefits, Tom Colicchio Blasts GOP as ‘Pro-Hunger’
Senate ‘Stunned’ That House Cut Food Stamps Out Of The Farm Bill
How Farmers (And Our Food) Are Affected By The Fiscal Cliff Deal