African Restaurant Assures Public It Won't Give You Ebola

African Restaurant Assures Public It Won’t Give You Ebola, People Freak Out Anyways (Because We’re All The Worst) 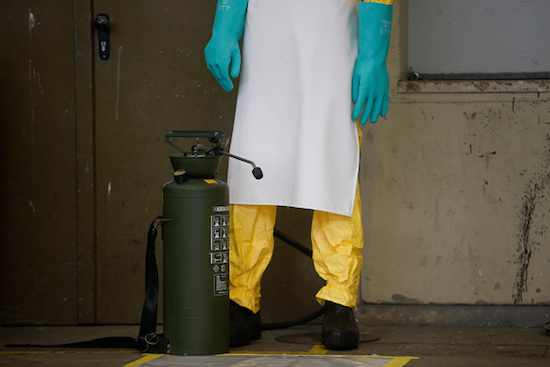 The flow chart of whether African food can give you ebola is pretty simple, actually: the answer is NO YOU MORON.

Nevertheless, the fears of an ebola epidemic have hampered business for one African restaurant in particular, Mama Ti’s African Kitchen in Brooklyn Park, Minn. So much to the point that the owners are trying to cover the “African” in the name and change everything to American food. Oh Americans, ruining it for all of us. From Twin Cities’ Fox News:

“Now they’re even afraid to shake our hands,” [owner Kellita Whisnant] says. “Just putting that tape up there triggered emotions that I keep down, but that really hurt.” …

The restaurant is now considering the possibility of changing the entire menu from Liberian cuisine to American deli food, just to survive.

“What could I bring in at this point to satisfy your fear,” Whisnant questions. “Will you come in and eat out of this restaurant if I sell philly cheese? If I do jumbo wings and fries?”

And yes, the state’s Department of Health is very, very sure that no one gets ebola from food, asking for the public’s help to “eradicate the stigma.” Or you know, general stupidity about diseases and Africa.

Whisnant says her restaurant’s business has dropped about 50 percent since the ebola outbreak panic started, and may only have about three months left to operate if customers don’t come back.

RELATED: Chili’s Cook Is Too Sexy For His Shirt (And His Job)
9 Reasons Why Jim Gaffigan Is Our Food Spirit Animal
New Ranking Of Highest-Grossing Restaurants Makes Us Never Want To Be a Restauranteur