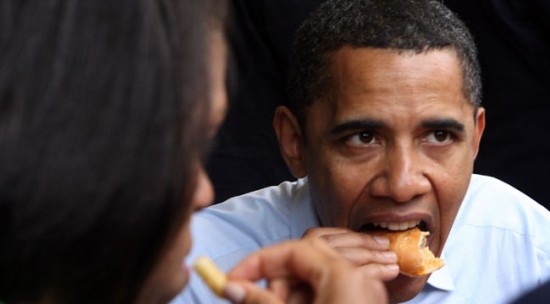 A doc non-profit called the Physicians Committee for Responsible Medicine (we bet they’re a riot at the office Christmas party…) has joined the ranks of Alice Waters in an effort to ban President Obama from enjoying food ever again.

You may remember Waters from that feud with Anthony Bourdain in which he condemned her letter to the President gunning for a vegetable patch on the White House lawn as a general presidential endorsement of veganism. He basically called her an elitist hippie blind to the plight of the poor in the current economic climate. Middle America can’t afford Whole Foods, sweetheart.

Well, the Physician’s Committee for Responsible Medicine has followed suit, and submitted a petition asking the White House to ban President Obama, the first family, Joe Biden, and the members of cabinet from consuming junk food on camera. This includes processed meat of any kind. No more sammies, guys. Sorry.

“The White House would never set up a photo op showing the president buying cigarettes, so why is it okay to show him eating a hot dog?” PCRM nutrition education director Susan Levin, M.S., R.D. points out. “Processed meats like hot dogs kill more Americans each year than tobacco does, and they cost taxpayers billions of dollars in healthcare. As role model to millions of Americans the president has a responsibility to watch what he eats in public.”

Photo ops like B-Rock chowing down on a hot dog at a basketball game with British Prime Minister David Cameron are the kinds of pro-junk food propaganda the crazies are rallying against. They also refer to his enjoying a night out at Five Guys as the equivalent of presidential product placement. Oy. Do you think Michelle is standing around somewhere gesturing wildly to herself and screaming “HELLO?!”

We happen to think the Obamas’ stance on healthy eating and efforts against obesity are fairly clearly represented to the public. But what do we know? We’re just a bunch of omnivores.