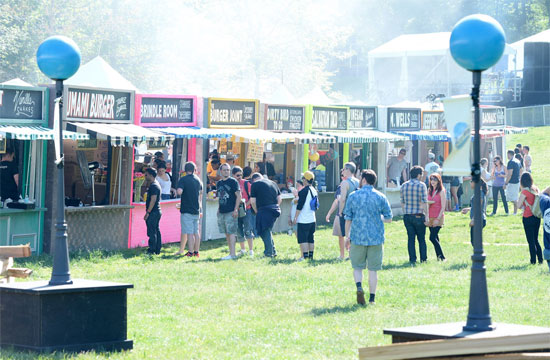 It’s been a week since the Great Flood Of GoogaMooga, which sounds like a Sumerian epic, but was actually a food festival ruined by a heavy rainstorm. As everybody asks the eternal Googa question — “so what went wrong this year?” — Allison Robicelli of cupcake supplier Robicelli’s wrote a thorough analysis of what screwed over the back end of the festival over at Medium.

The short answer: it rained.

The more elaborate answer: the New York Parks Department killed the event on Sunday, saying that the rain and crowds would have ruined the lawn. Robicelli’s retort: “If this event had been on Randall’s Island, the Piers in Brooklyn Bridge Park, Coney Island, Floyd Bennett Field or any of the dozens of more appropriate locations I can think of offhand, it would still have gone on, rain be damned.” She also points out that this could have been easily solved with a few tents.

But even if it hadn’t rained, Robicelli says there were other major issues that needed to be fixed. Here are her suggestions for future Googas (if there should be such a thing).

Bring in more non-local restaurants (we can attest to the long, long lines at the Los Angeles-based Umami Burger):

Longest line usually goes to the item you can’t get locally. Then more people assume the line is because the food is better than the other offerings and hop right on it. Crickets to the left, crickets to the right.

Stop Ripping Off Your Own Vendors With Your Water Schemes:

There was never an “official water sponsor”. There was only Spectrum Concessions, the water distributor, ripping all of us off. $1,600 of water “collected from a well or municipal water supply”, aka, tap water. And thanks to people’s resistance to paying $3 for tap water, we sold about twenty bottles total.

…we could sell back any unsold cases of water to Spectrum Concessions for $25 a case, so they could resell them again for $40 a case. I would have lost $625 on the deal, but I got shystered. It happens. You didn’t think this story simply ends here, did you? Because that would be far too easy!

Googa Mooga got cancelled because of rain. And know what rain does? It makes things wet! Like my 39 ½ cases of bottled water, which were no longer in good enough condition for Spectrum to take back for resale!

Robicelli actually applauded Superfly Presents — who worked with the chefs to avoid last year’s near-riots, gave the restaurant teams their own accomodations (including their own port-a-potties, which is a huge deal at a music festival) and, most importantly, announced that they would not take their cut of the chefs’ profits. “Googa Mooga still treats chefs with more respect than most events,” Robicelli firmly states. Which brings her to her last point — why can’t anyone else talk about how great the food was at Googa?

We worked so freaking hard on making our addition to the Googa Mooga menu amazing, and all anyone can talk about is the stupid rain! PAY ATTENTION TO US, GODDAMNIT!

For more of her insights (as well as funny pictures), click the link below.