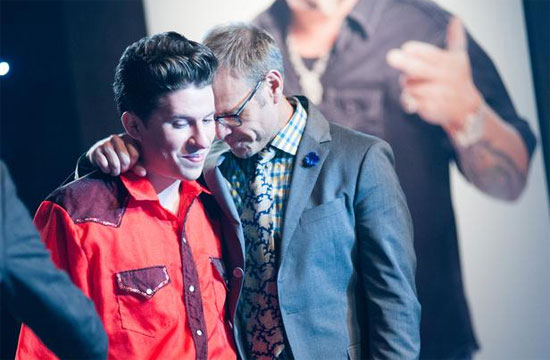 Hat tip to Andrew Zimmern for pointing out that no one’s really working right now, because that long weekend is sooo close. To help pass the time, Alton Brown is on Reddit right now doing an AMA — which, so far, has yielded incredibly interesting revelations about his protege and Braiser Bosom Buddy (BBB?) Justin Warner.

Turns out that the Rebel Eats host and the winner of Next Food Network Star is in some sort of weird Network limbo when it comes to doing an actual show. “I don’t know what they have planned for him next,” Brown admitted. “I’d really like to see him do a full on cooking show for the digital world but I don’t have the power to make that happen.”

Sigh. We can’t believe that a man who styled himself a Mad Scientist/Food Wizard cannot make the impossible happen. Next you’re gonna tell us that it’s going to rain all Memorial Day weekend.

Of course, Brown’s answering other questions about food (he’s made curried lamb’s eyeballs, which, wow), producing Good Eats (rest in peace), and his favorite episode of Doctor Who (“I don’t have a favorite episode but Dr. 10 is my Dr.”). Submit your questions to Reddit — because, after all, it’s called “Ask Me Anything.”

In regard to a potential television show described thusly: “Brown and Bourdain travel across the world, tracing modern, familiar dishes to their cultural nascency. Brown supplies the facts, Bourdain supplies the color. It’s called A to B.”

What is the one food that Food Network would not let you make an episode of Good Eats about, that you wanted to do the most?

“Food Network has always been very supportive of me and they’ve let me get away with a lot but when I said ‘sweetbreads’ they said “no.” Same with rabbit.”