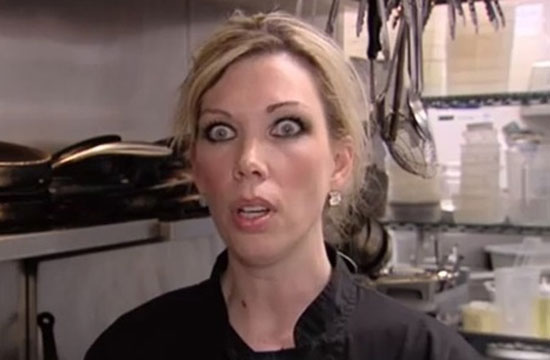 The clusterfuck firestorm known as Amy’s Baking Company just drifted into quite serious legal problems. This morning, USAToday broke the news that co-owner Samy Bouzaglo was in a deportation hearing yesterday, and is banned from France and Germany for charges related to drug trafficking. And now, after a bit of internet digging, we’re throwing more illegal shenanigans into the fire: Amy Bouzaglo was a felon.

In an Arizona Republic article, Jennifer McClellan reports that Bouzaglo formerly went by the name “Amanda Bossingham,” and spent 14 months in federal prison in 2008. According to a request to modify her sentence filed in an Arizona District Court, Amanda, who went by her ex-husband’s last name at the time, attempted to use someone else’s Social Security number while applying for a $15,000 bank loan — which is a class D felony offense. (The entire PDF is hilarious to read, if only for Amy’s legal team’s insistence that she’s a model citizen.)

Additional records found by WCSH6 discovered that Amy’s criminal past goes even deeper: “Amy faced four judgments in Colorado in 1998 and 1999 totaling about $14,000. She was also sued in Arizona in 2000 for $3,229. The judgments appear to have arisen from unpaid debts that were turned over to collection agencies.”

This is the Kitchen Nightmares drama that will never end. Yes, it goes on and on, our friends.