The Winner of MasterChef Junior

WATCH: And the Winner of MasterChef Junior Is … 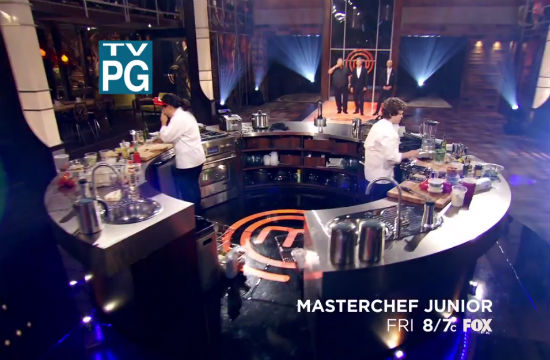 There have been a lot of reasons to love this first season of MasterChef Junior. Yes, there were adorable kids and stunning culinary feats and food mishaps (re: dunking the three judges in whipped cream). But maybe it was Joe Bastianich who said it best during the finale of MasterChef Junior: these kids have done something powerful on food TV (and with so much food TV, that’s saying something). “You’ve changed how every aspiring young home chef thinks about cooking, food, and what is possible,” Bastianich said to the two competitors left, Dara and Alexander. And yes, these pint-sized chefs have shown Bastianich, Gordon Ramsay, Graham Elliot, and the entire food world that there is something to look forward to in the industry. Sure, some of these junior chefs might go a little nutso as adults (because we’ve documented all the nutso things celebrity chefs do now). But that doesn’t mean we can’t toast our apple cider (kids, y’all) to the achievements everyone of these junior MasterChefs. (Says the writer eating take out while watching kids whip up a three course meal.)

2. The recaps of Dara and Alexander’s journeys on MasterChef Junior are very touching. As they both say, this is what they’re made to do — it’s got a touch of destiny to it all. We therefore declare that Alexander is the next Jean Georges Vongerichten and Dara is the next … well, we think she could be a lot of different people. David Chang? Amanda Cohen? Weigh in with your vote.

3. Also, how did we not know that Alexander was called Big Al on the show?! Cuteness factor just shot through the roof!

4. The best part of the finale? Everyone’s back! It’s not only endearing to see families in the galley ready to cheer on their youngest chefs, but also the other kid contestants. We’ll get to the kids’ reactions in a second.

5. Second best part of the finale? LUKA! Season 4 winner of MasterChef is in the galley, ready to cheer the kids on.

6. Alexander and Dara are told the final challenge: a three course, restaurant-quality meal in 90 minutes. K. And here comes the one really not adorable, totally stupid moment of the show: the kids run to the pantry to gather their ingredients, and momentum is SHOT and interrupted by a Skype call from long lost relatives. WTF? WORST PRODUCT PLACEMENT EVER, Skype / Fox execs. Just let them get to work! How about a Skype call AFTER the winner is announced? This is a d’oh moment if there ever was one. If it had been a Skype call with their chef mentors (which we assumed it was, at first), that would have been better. But Auntie and Uncle can wait for 90 minutes until after the show, we promise.

7. Back to the cooking, back to the adorableness. Luka: “It’s amazing just to see these kids, who are 12, 13 years old — I couldn’t cook then. I couldn’t make a fried egg!” Neither could we, Luka — we’re ready for cooking lessons, if you are.

8. The former contestants make their predictions. Gavin thinks Alexander will overcomplicate things (not totally an unbased assumption) and Dara will win. Sarah, ever so slightly undercutting, says Dara’s menu is “creative but unappealing,” and thinks Alexander will win. Kaylen wins at life for her sound byte: “OH SNAP, Alexander versus Dara? THIS IS GOING TO BE EPIC.” Think our eggs exploded with our ovaries, too.

9. While the chefs start the challenge, the moms chime in with their own sound bytes. Nothing gets tear ducts going more than proud mamas, right? (Hi Mom!) Dara’s mom says they’ve been blown away by Dara’s talent; Alexander’s mom says he’s in his element and “on the ride of his life.”

10. Everyone’s freaking the eff out while the kids cook, understandably. Luka too, adorable. He says he can barely handle it himself. But all of a sudden, OMG — Dara is flushed. She says she’s light headed, and feels like she’s going to faint. Ramsay tells her to take a deep breath, but she’s clearly not functioning. Alexander gives her just about the most reassuring, sweetest hug in the world. But whoa, commercial break. This is the moment that our roommate walks in and freaks out with us — “GIVE THE GIRL SOME WATER!” Stressful moments, indeed.

11. Dara does in fact get water, thank God. So does Alexander — in fact, we’re wondering if they stopped the clock? They needed an extra second to regain their composure. After all, they’re TWELVE AND THIRTEEN YEARS OLD. (And you know, a lawsuit for letting a minor faint around hot burners and ovens would have been all around disaster for FOX — those most be some intense contracts these families sign before filming.)

12. Sure enough, time runs out and the kids look SO happy. Alexander’s gesture, arms thrown up in the air, is reminiscent of runners finishing a marathon. And Alexander’s mom is crying! Aww.

13. The judgment day is here, and there’s not a damnation to be had here. In fact, the judges say that some of these dishes are the best they’ve had on a finale, ever. Some of the praise rained upon Alexander and Dara:

“This technical ability, at age 12, speaks volumes.” — Elliot to Dara on her tuna and poke appetizer

“When I was 12 years old, I was eating canned tuna with mayo!” Ramsay to Dara

“I love the fact that you steamed these prawns — that’s a mentality of a chef. [Incredulous] What’s wrong with you?” — Elliot to Dara

“These are the best, visually appealing, cooked veal chops in the country in tonight — chefs are shivering about the way that’s cooked.” — Ramsay to Alexander on his pan seared veal chop and gnocchi (to which Alexander did a little dance)

“Pillows of magic! These gnocchi are a little like you and me — hard on the outside, magical on the inside.” –- Ramsay to Alexander

“You know who the hero of this dish is? You are, the 13-year old that cooked it.” — Bastianich to Alexander

“This is the perfect, harmonious ending note to an incredible symphony of dishes.” — Ramsay to Dara

The judges are right — whatever happens, both of these kids have a lot to be proud of.

14. As the judges make a decision, I had a gut feeling about who the winner would be. And sure enough, I was right! Even Luka looked like he was nervous for the kids. Finally, it was for Alexander that confetti fell, crowds cheered, and kids saw childhood dreams come true.

15. Aw, Dara is crying — understandably. But she, too, remembers that she is still a winner. “I’m a winner — I made it to the finale, I have this jacket that says ‘MasterChef Junior.’” Yeah you do, Dara!

16. Of course, Alexander is thrilled. And he’s a gracious winner to Dara, which is really great. His mom is crying happy tears, too. We should all be crying happy tears, at this point — thousands of kids, whipping our asses at cooking every day. Congrats Alexander, Dara, and all!

RELATED:
Tonight in Food TV: The MasterChef Junior Finale
Last Call: Did You Recognize One of the Kids in That Gay Marriage Reaction Video?
WATCH: Chicken, Eggs, and Tears on MasterChef Junior