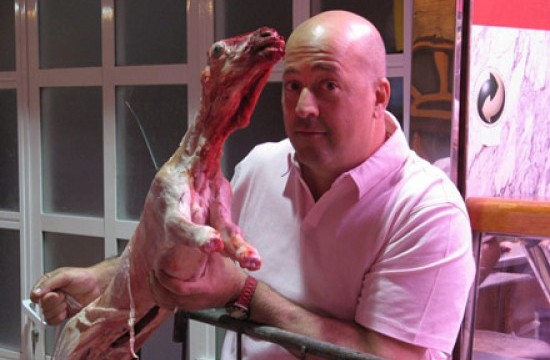 Andrew Zimmern is not only a smart guy who will eat anything that’s placed in front of him, he’s also a smart guy with Secret Industry Insider Knowledge. So he can authoritatively call BS on Forbes’s recent listicle of the richest celebrity chefs out there — specifically, he says in a blog post that their findings, determined with a methodology that calculated their revenue based on earnings from restaurants, TV shows, and product sales, are “way off base.”

In terms of true income the list is way off base. And in being so “off target” it’s harmful…Some of the chefs on the list make waaaaay more than what is listed, and I can think of several chefs off the top of my head who aren’t on the list at all who have better months than the number 10 chef (Guy Fieri at 8 million) has years. Mario [Batali] at number 5? Ever seen the checkout line at Eataly? Correct answer to that question is which location? Their math is way off base. [Thomas] Keller, [Daniel] Boulud, [Tom] Colicchio . . . I could go on and on . . . lots of chefs who keep these matters private are doing very well, and I imagine some of the bozos on the list love to see their name up there. It’s nauseating.

Oh, Forbes. We love how you forgot that Tom Colicchio is the producer of this show that’s sort of a big deal, or that Emeril Lagasse created an entire cottage industry based on the word “Bam!”, or even that Daniel Boulud is a famous person with an empire of restaurants.