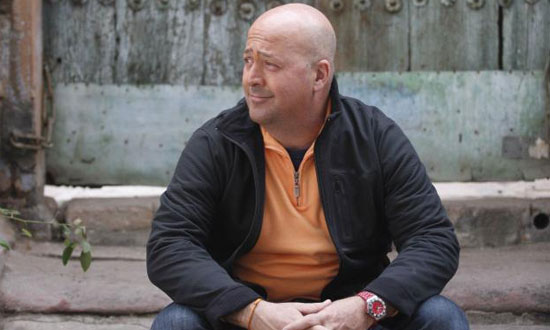 There are interviews, and then there are interviews. Any conversation with Andrew Zimmern falls squarely into the latter category. Like his former Travel Channel cohort Anthony Bourdain, Zimmern speaks in complete paragraphs and offers lengthy, thoughtful, and nuanced answers to the softest of questions. We were lucky enough to spend almost a full hour with the man during last weekend’s Food & Wine Classic. Here’s what he had to say about the new season of Bizarre Foods, L.L. Cool J, and why he and Bourdain are the luckiest men on TV.

The Braiser: What can you tell me about the upcoming season of Bizarre Foods?

Andrew Zimmern: It starts out with our 100th episode which is shot in Vegas. We do a special beforehand to look at the previous 99 episodes and the 100th episode is a blast. We did some really fun stuff in Vegas, but the show finishes with Muhammad Ali’s 70th birthday party. As a geeky sports fan and adult child, to see and be a part of that is just unbelievable.

His birthday party was crazy, the food was crazy. It’s 1,800 people in the dining room — presidents, rock stars, movie stars. We looked at the seating list — they didn’t allow us to shoot it for the show — but the furthest row, all the way at the back, is Fortune 20 CEOs, the secretary of state. I mean, it was such an insane crowd. Robin Leach — yes, he’s still around — I have him on camera and he’s like, ‘This is the single most amazing event I’ve seen in Las Vegas in 30 years.’ And I’m like, ‘Do you say that every weekend?’ And he’s like, ‘No, this really, truly is spectacular.’ So the “bizarre” nature was how do you do the dinner of the decade for 1,800 people. And the chefs and the lengths that they went to to make the food was, I think, a really amazing, amazing feat.

Don’t call it a comeback!

Exactly! There you go. So I’m standing there, hoping to see him, hoping that when he comes by with his entourage, I get a chance to go up to him. We shot this episode 5 or 6 days after the Grammys and he had given that eloquent speech about Whitney Houston passing away, so I just wanted to tell him, ‘I love what you do. You’re a great dad.’ I really respect great dads and I try to be one myself. So! He sees me and he breaks through his cordon of security and is like, ‘Andrew Zimmern! Oh my god! You gotta take a picture with me. My kids love you.’ And he gets out the iPhone to take a picture of him and I and I’m like, ‘This is not happening. I have the greatest job in the world.’

Speaking of kids, how do you raise your son to be as open-minded about food as you are?

He’s just an open-minded eater. Number one: there is never a choice. Number two: the culture and psychological messaging that we gave him when he was ten months old, eleven months old, twelve months old, we never used words like, ‘Oh, that’s gross!’ or ‘Ewwww!’ And I am amazed how many times as we were raising Noah, and maybe over at other people’s houses with children, how many people use that language. If you as a parent, make disparaging comments around your kid about food in general or lessen its importance, you will raise a child who doesn’t understand its importance.

We try to teach Noah that his job at dinner is to ask questions. And so we always steer that so at least one question a night had to be about the food we were eating. Like who grew it, why it’s important to eat certain things and not others. And I think Noah was about four, one night, when he came home from a friend’s house from dinner and he said something like, ‘Yeah, they put too much protein on everyone’s plate and not enough vegetables.’ And I was just like, ‘That is so awesome.’

He’s just aware. Food, people don’t understand, is such an important factor in our daily lives, in our international relations, in our sociological make-up. It impacts environmental and cultural and economical sustainability. It’s one of the driving cultural forces in the world and that’s what my show is all about. So to not raise children to be aware of that is crazy. And the last thing is that, little children eat dried fish jerky in Japan. That’s their snack of choice. So something that’s dry and salty and fishy, is not genetically abhorrent to four-year-olds. In fact, it’s the exact opposite. They’re more open-minded. What kills that open-mindedness is how our culture presents that food. So if we raise a whole generation of children that they’re rewarded by having a treat, and that treat is an ice cream cone, candy bar, a doughnut, or a bag of chips, we’re giving the exact wrong message. If Noah wants to have something sweet after he finishes his dinner, he can have it. But we don’t call it dessert and it’s not a reward. So how you parent around that is very, very, very important.

There were some aspects of some of our first few episodes that was like, ‘Alright, we’ve got these three or four stories and the rest we’ll figure out when we get down there.’ As advertising is sold against the show, as the crew gets larger, as the expense is greater, as the pressure becomes larger to achieve certain things, you have to have more than enough stories scouted and ready to go. That being said, it would be like coming here [to Aspen] and finding someone who had a restaurant and they went out every night and trapped some sort of Rocky Mountain animal and served it every morning. We know we’re going to meet them at 4AM to go out and trap. We know we’re going to go back and cook with them. Beyond that, it’s not staged, it’s not scripted, what we shoot is what we see. We don’t fake anything. It’s the thing I’m proudest of: we’ve never faked anything in our show. I would say a full third of our shows are the stories we discover when we’re there.

>>>>NEXT: Zimmern on Bourdain’s move to CNN, culinary imperialism, and the best kept secret in the food industry…