Who Would Win in a Fight Between Andrew Zimmern and Anthony Bourdain? 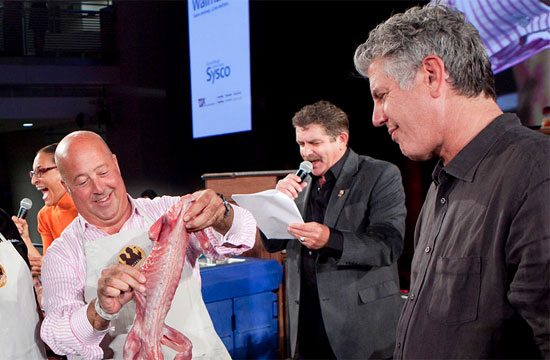 To his everlasting credit, Andrew Zimmern’s first Reddit AMA did not involve him answering the question “Would you rather eat one horse-sized duck or one hundred duck-sized horses” — which, really, Reddit, move on — but he did throw an answer out there for all of the people who have ever wondered who would win in a death match between him and the other smart traveling chef, Anthony Bourdain:

That’s a great question. Tony is a badass motherfucker… and lately, he’s been getting MMA lessons from his fight-professional wife, Ottavia. I don’t like anybody’s chances against a trained fighter who is 6’4″, 235 lbs… All of that being said, I would never bet against myself, anywhere, anytime in any alley. Just ask my martial arts coach, Tiger Chen, he’ll vouch for me. However, I would never fight one of my friends. The question you want to ask is who would Tony and I take out in a tag-team match…discuss!

So wait, Bourdain is actually training training? Like, beyond Ottavia demanding he punch things? Meep.

But more importantly, what the hell? Andrew Zimmern’s martial arts teacher is kung fu star Tiger Chen?! Zimmern may want to reconsider painting himself as the automatic loser in a back-alley fight. Re-assess his own abilities, as it were.

Other fun facts about Andrew Zimmern include the information in this exchange:

Q: Durian, Walnuts, or Mc Nuggets, if you had to eat a bowl?

We are both betrayed and applaud your wise choice, Andrew Zimmern.